TimeSymmetry’s Vector Thrust is one of those games I wanted to keep an eye on throughout its development leading up to release because it looked like such a fun throwback to the old arcade games of old where you sit in the cockpit, grab hold of the joystick and just have a field day shooting down bad guys all day long; for those who want to do just that from the comfort of their computer chair, you can do so right now because Vector Thrust has graduated Early Access to launch on Steam.

As mentioned in the description on the store page…

“Vector Thrust is a fast-paced single and mulltiplayer combat flight game, using a unique cel shaded art style. With an extensive variety of game modes like the unpredictable and vicious Quick Action, a customizable Skirmish Mode, and multiple immersive story-based campaigns, Vector Thrust aims to please both players wanting to get straight into the sky and those who love a flexible, diverse and customizable gaming experience.”

The game features more than 260 different flyable aircraft, 170 challenges to tackle, 13 campaign missions, and various mega-bosses to face down against. You can see what the game looks like in the launch trailer below.

What was up with that trailer? Someone needs to retrofit it with Kenny Loggins’ Danger Zone.

Here, try replaying the trailer above but mute the volume and play this instead.

Ah, much better, wouldn’t you say?

Anyway, gamers are highly divided but a lot of people are complaining about the game’s controls being clunky and that it’s not enough like Ace Combat. The reviews are actually quite disparate because a large portion of people from the Early Access group have praised the game as being on the right track, while those who purchased the game after it graduated from Early Access are saying that the game lacks polish. What sort of polish? No one seems to offer anything too detailed, but there are a lot of general complaints about the game, making it difficult to decipher exactly what TimeSymmetry needs to fix.

Windy writes in their review…

“I think whats throwing so many people off is that its not a direct Ace Combat clone, because of that. You end up playing this in the Ace Combat mindset and it ends up backfiring. This might have something to do with the flight model, or the planes. Or just the game in general. I’m not too sure.” 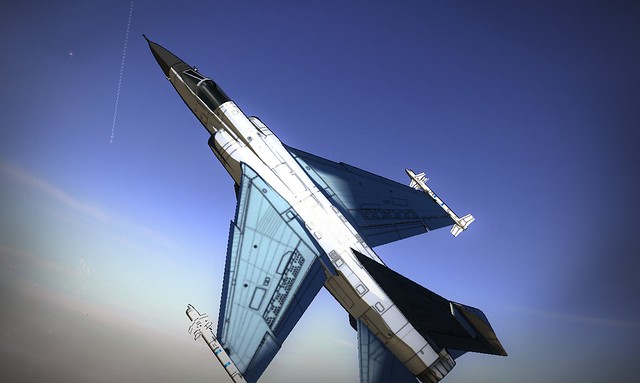 Windy’s sentiments are shared amongst a few others who gave the game a thumbs down because it’s not an Ace Combat clone. It’s hard to know what to take away from it given that many of the complaints are centered around the fact that it’s an arcade game and not an actual, real-to-life flight sim.

“[Honestly] i prefer Flight sim games that are well…sim, such as DCS, however this game [reminds] me on the anime Area 88 and i am enjoying it so far, i do use a flight stick and have [custom] bound the keys to my liking so in regards to many other reviews stating that the controls are sloppy i cant comment as it two different things mouse and keyboard vs flight stick. i do hope they get around to making an in cockpit view for the aircraft and eventually [flesh] out and detail some of the terrain, but overall i am enjoying this game for what it is, arcade flight…”

Basically, if you don’t go in expecting an AAA Ace Combat game or a IL-2 Sturmovik sim, you just might enjoy what TimeSymmetry has to offer, but if you have certain standards with certain expectations, you might want to add it to your wishlist and make a return to the Steam store page when the time is right.