One of the most talked about side-scrolling titles to land on home consoles and PC this summer is Tembo: The Badass Elephant. The game sees players taking on the role of the titular Tembo as he uses his badass abilities to protect Shell City from danger. The game is a classic throwback to the old-school side-scrollers that put Sega on the map back in the 1980s and 1990s, and some gamers are having difficulty tackling some the more challenging levels. Thankfully, there is a walkthrough guide available to help with both the stages and honing in strategies to engage in the boss battles.

The walkthrough guide is made for gamers who want to get 100%. This means beating all the Phantom enemies and rescuing all the civilians. If you’re an achievement junkie then it fits up your alley.

The walkthrough video comes courtesy of Xbox Alive, not to be confused with Xbox Live. The video walkthrough contains 18 videos spanning from start to finish, which means all 18 levels are included. You can check it out below.

For the very first boss battle, it’s a giant dragon tank. The objective is to bump him off the platform into the fiery lava. To do so, just get in close and stay underneath the fireballs that he shoots out. He also rains down a fireballs at a short distance to get you when you back up – they’re easy to dodge except for when he rolls out a slow bomb toward you. If you don’t want to take life or don’t have life to give, just back up to dodge the fireballs and then jump over the slow rolling bomb. Rinse and repeat until you can bump the boss off the platform.

For the third boss, against the giant wasp, you’ll need to expand the platforms and use them as springs to jump up and bamp the boss on the red spot on his head. Use the Tembo’s water to shoot the platforms to make them expand. It’s not too difficult. The only thing to watch out for are the missile barrages. 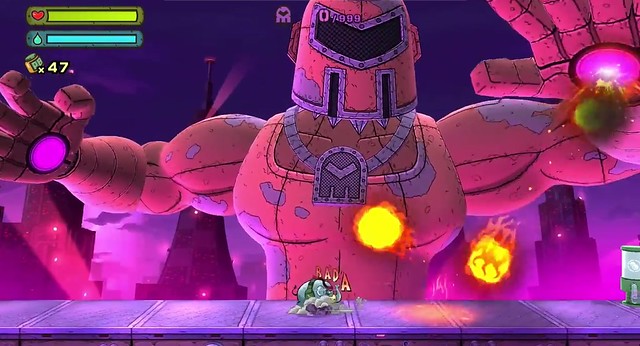 The third boss fight is kind of reminiscent to the mine boss from the flying Death Egg zone in Sonic & Knuckles. Sega was obviously drawing a lot of inspiration from their older titles. The giant, deadly disco ball in Tembo requires you to uppercut him while he’s in the air in order to knock him into the sliding electric prod at the top of the screen. You’ll need to dodge his random-direction fireballs. Now, in order to knock the disco ball upward it’s only possible to uppercut him when he’s jumping, otherwise it won’t work.

For the final boss, the flames that he shoots aren’t shouldn’t be jumped. Instead, walk under them as they bounce over Tembo’s head. Attack the fist three times to destroy the arm after he smashes it into the ground. It’s almost identical to the giant Eggmech in Sonic & Knuckles. After he begins shooting the lasers just wait for him to telegraph it by watching for the eyes to glow.

Tembo: The Badass Elephant is available right now for the PS4, Xbox One and PC. You can learn more about the game by paying a visit to the official website.