Grip Games announced today that Q.U.B.E. Director’s Cut is currently available for PlayStation 3 and PlayStation 4 owners. The game will also launch soon for Wii U owners next month in August. The title will also release on the Xbox One beginning July 24th.

According to Grip Games’ Jakub Mikyska…

“Everyone who became immersed in Q.U.B.E on its first release will be glad to return to face the all-new challenges, while gamers who have yet to experience the mysteries of Q.U.B.E have a treat in store”

You can check out the launch trailer for the Director’s Cut below.

Q.U.B.E: Director’s Cut is a brain-twisting first-person puzzler. Using special high-tech gloves, you manipulate the environment around you – build bridges, shift walls, open new paths – in order to journey deep into a mysterious giant cube hurtling through space towards Earth and destroy it from within before it eradicates all life on our planet!

That trailer really does remind me of the old David Cronenberg film Cube.

Originally, Q.U.B.E. was a student project that eventually evolved into a consumer product when the developers officially formed Toxic Games. It sold well enough as an indie title on PC that it eventually managed to get a release on the home consoles.

The game is easily compared to other titles like Portal and Antechamber. There’s even a new game out designed in a similar fashion called Colortone. 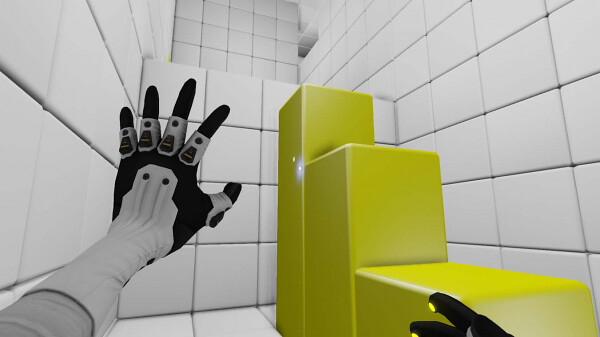 For gamers who like their games that force those muscles in their head cave to flex like Mr. Olympia’s Phil Heath, they’ll find that Q.U.B.E. is a game that’s ripe for the cognitive running. Unlike Portal, though, a lot of the puzzles are centered around object placement and logic equations centering around getting through rooms with light platforming and environmental manipulation. You won’t be blasting through portals and wrecking your brain on trying to figure out how half your body is in one place while also simultaneously being somewhere else. Although, I have to admit that’s a pretty cool feature in Portal.

The title is a cross-buy game for PS3 and PS4 owners, so if you buy it on one system you’ll be able to play it for free on the other. A nice little way to address the lack of proper backwards compatibility between the PS3 and PS4.

You can learn more about Q.U.B.E. Director’s Cut by hitting up the game’s official website.