Jonathan Daniel Brown, one of the stars from the movie Project X and the lead in Kid Cannabis, was told by former athlete Chris Kluwe to research #Gamergate. Kluwe’s intention was to get Brown to go from light anti-GG to full-on haterade anti-GG. However, Kluwe’s plans backfired since reality doesn’t quite align with the media’s distorted painting of consumers staging a revolt under the hashtag.

Brown kept it simple on Twitter, stating the following. 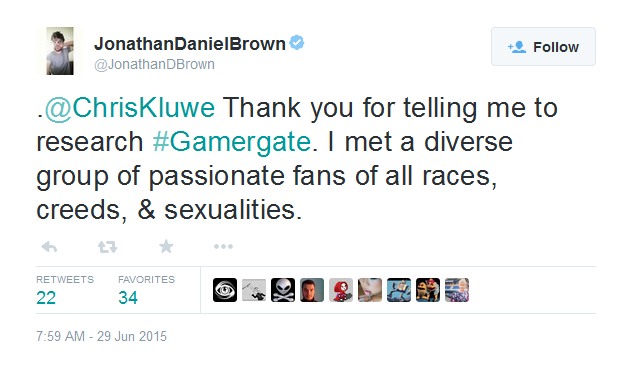 Kotaku In Action [backup] quickly picked up on the tweets and it became one of the top threads in the sub-Reddit. The attention the thread was receiving actually caught the eye of Hollywood actor Jonathan Daniel Brown, who dipped into the thread to talk it out with the denizens of Kotaku in Action.

“Comedy’s in a weird place, and seeing the attacks on Trevor Noah, Amy Schumer, etc by SJWs has really been an eye opening experience for me. These assholes dig through comedians’ tweets from years ago then publicly crucify them. I’m extremely liberal and bought into the Anti-GG propaganda for a brief bit”

Brown rolls out a few bullet points on the hypocrisy exercised by those labeled as “Social Justice Warriors” – these aren’t the social justice advocates who actually help people, like the Mother Theresas and Mahatma Ghandis of the world. No, these are people who take offense at any little thing and dogpile on people who don’t agree with them.

He even takes digs at the click-bait phenomenon that has contributed to what’s now known as outrage culture. A culture, I might add, that was used to help build up empires like Gawker… and a culture that also appears to be the cause of their downfall.

Brown goes on to point out how one of his neighbors is also one of his prime antagonists, stating…

“I probably should have known better. I live in the same building as a scumbag critic who has personally stalked and attacked me and frequently writes Anti-GG nonsense. When he reviewed Project X, he used moral panic and SJW hyperbole to savage it as evil and offensive and needs to be banned blahblahblah, despite the fact that it was basically just an American Pie style comedy for a newer generation. (Sequel next year btw)”

“In conclusion: I was wrong, GG’s pretty punk rock, and fuck SJWs, they’re fascists. I’m all about pro-consumer movements, and that’s all GG really is. Feel free to follow me on Twitter if you ever feel like reading more of my verbal diarrhea, or just watch Project X or Kid Cannabis, as that helps pay rent for now, somehow.”

This kind of attack on those in the media industry has escalated recently, with Niche Gamer recently reporting that beloved voice actor Troy Baker backed away from Twitter after being attacked for making a joke about Caitlyn Jenner.

While there have been a lot of casualties throughout what many deem to be the great “culture wars” of our time, one thing is for certain: the longer #GamerGate persists the more the truth will come out.

[Update: The spelling of Jonathan Daniel Brown’s name was corrected]