The Australian Broadcasting Corporation was caught in an alleged lie regarding their coverage of #GamerGate. They told the ACMA that there were no interviews on hand to offer a counter perspective to the slanted news story they ran on #GamerGate, even though it turns out that they did have interviews on hand offering a counter perspective. One of Australia’s Senators has been investigating the ABC recently after charges of journalistic impropriety were brought to his attention, and ABC producer Tom Greenard said that the Senator could “STFU”. For those not in the know, it’s an acronym that means “Shut The F**k up”.

Recently, a member of the Liberal Party in Queensland, Australia reached out to inform me that the situation regarding the ABC and their slanted coverage of #GamerGate has escalated quite quickly. In fact, he reached out to various important figures in Australia’s political community, one of which included Queensland Senator James McGrath. When informed about the ABC’s alleged lie to the ACMA regarding covering up their position to run a slanted piece on #GamerGate, McGrath responded saying…

“Thank you for that piece of information. I am investigating the matter and if appropriate will question the ABC on it at the next Senate Estimates.”

The ACMA was also notified about the ABC’s attempt to absolve themselves of any blame by claiming that they had no interviews on hand to provide a balanced view of #GamerGate, even though they did. One of the media representatives for the ACMA simply stated that they would “look into it”. Two other media officers of the ACMA were also informed about the situation.

Nevertheless, James McGrath has been investigating separate issues regarding the ABC and charges leveled at the corporation for running slanted news stories. However, his attempts to get the ABC to straighten up recently led ABC producer Tom Greenard to post a message on Facebook saying…

“I have just one feeling. The Senator should STFU” 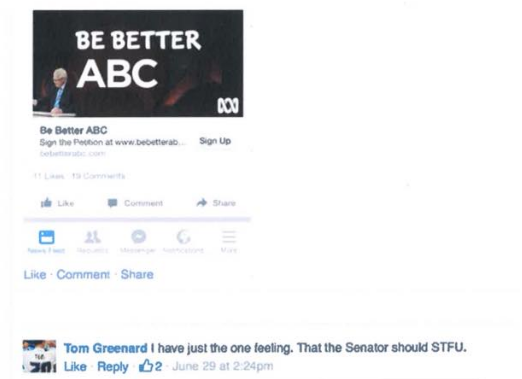 “The issue is not the language but the mindset of the ABC. Sadly sections of the ABC see themselves beyond reproach or question and diminish those who ask questions of a $1.1 billion dollar taxpayer funded entity.

“The producer’s comment is is merely the latest example of why a much-loved icon is turning into a rampant leftist quagmire. Whether it is appointing Ray Martin, a Q&A apologist as an independent reviewer or a taxpayer-funded producer shutting down debate, the ABC needs to take a good hard look at itself.

“I have written to Mark Scott asking a series of questions about breaches of the ABC’s social media policy. I shall keep you informed of the response.”

#GamerGate is now part of a series of slanted news stories and misappropriated uses of information from a national broadcasting platform at the Australian Broadcasting Corporation.

The original ABC 7:30 segment can be viewed below, where they spend a good deal talking to the Good Game crew getting their take on #GamerGate. Monique Schafter was also in talks with another individual identified as “pro-GamerGate” feeding her information on the corruption angle, where she revealed to them that she would attempt to get the bottom of the story. However, the segment was a one-sided hit-piece.

One of the ABC’s Good Game producer, Ben Shackleford, defended the position of the broadcasting corporation, saying on Twitter…

“For no reason other than time and relevance. Not everything is about us trying to take sides or corruption. We did some interviews regarding GamerGate but didn’t end up running a story as we felt there wasn’t really one.

“It’s nothing personal and no conspiracy; it’s just the way television works. Not everything makes it to air. You have to understand the size of ABC and how things work. There were multiple crews there filming for different..reasons and for different purposes. We don’t all talk to each other all of the time. And no one interviewed clearly said “I support GamerGate for these reasons…”

“I’ve emailed you back mate if you want more info or want to take this further but honestly there really isn’t a story here.”

According to the ACMA report, it was stated…

As Ben Shackleford noted, they did have interviews on hand and the Good Game crew obviously participated in the 7:30 segment, but any “counter perspective” was chosen not to air.

According to Senator James McGrath, it also appears there is a story here. In fact, on July 9th, 2015 Senator James McGrath had the following letter sent to the ABC regarding their behavior and the viewers’ charge that the broadcasting corporation is on a very tilted political slant when presenting news. You can check out the letter in its entirety below that James posted to Facebook. 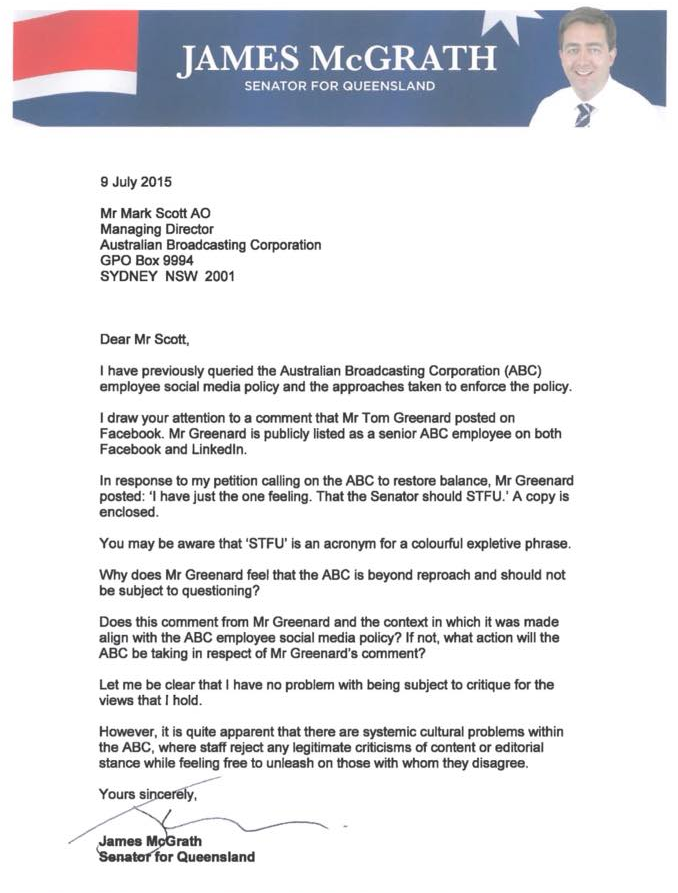