Tony Hawk’s Pro Skater 5 came onto the scene in a weird way. It was leaked by mistake and managed to gain a bit of hype. People were curious what Activision would bring to the table and when the gameplay footage finally arrived gamers faced the footage with the kind of chagrin one would imagine emanating from a strict Catholic household when they find out their daughter is marrying a Wiccan.

The footage below from Tony Hawk’s Pro Skater 5 shows off the sort of gameplay that many feared was coming. Gamers – after recognizing that Robomodo would be heading up development – began speculating that the game would be nothing more than a mobile port with a bit of post-processing and a $60 price tag for the Xbox One and PS4. Well, you can see the gameplay footage below to see what has kicked up so much fuss.

The video’s rating currently looks like this at the moment.

MKIceandFire also hosted the exact same video and the ratings are a lot higher but the comments on the video are quite telling.

DJJEZ1983 kicked things off by saying…

Some jumped to the defense of Robomodo, saying the Tony Hawk games were never about graphics and all about the gameplay. With GhostMonkey Lynge saying…

“THPS was never about graphics. It was about skating And the gameplay.”

However, many others expressed disappointment in the game’s sloppy animations, poor animation transitions, lack of move blending and the overall floaty and unconvincing game physics.

“i love the thps series, but i honestly think thps2 on the sega dreamcast looks more realistic than this one. the physics look so fake and ridiculous. the speed in which you move and fall looks so awkward and over the top. the physics are a huge part of the feel of the game, and i can already tell that it’s gonna suck :(“

For those that don’t know there are tools available — some of which are free — that allow you to blend animations and adapt proper physics on the fly. Unity, in fact, has built-in animation tree blending that allows you to point-and-click how to properly blend frames without separate transitional key frames. In simple terms, today’s tech allows you to easily make animations look as smooth as possible on the fly without having to redo the animations from scratch or make separate animated frames specific for transitioning (which is something animators and artists had to do back in the day for both 2D and 3D games).

In the comment section of the video, Mr Zmurkz states…

“Yeah, looks like the shit remake of Tony Hawk 1 Robomodo made. It’s the same crap engine. That remake sucked because it didn’t feel like the smooth old Neversoft tony hawk games because of the awful new engine and physics. That ollie looks so unnatural. You can’t just hand this to new developers and expect it to be like the old ones. Robomodo made the awful Tony Hawk Ride and Shred as well.” 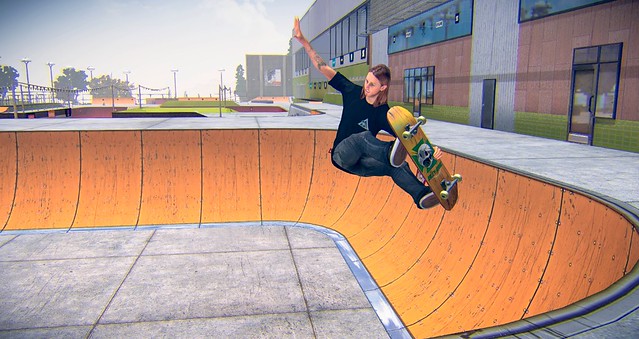 Others took an opportunity to joke about the game’s ported-over graphics, with XXLE6IT2 saying…

On Google+ Dave Roth commented about the game after seeing the video, saying…

“The new Tony Hawk gameplay video was out and my worst nightmare appears to be coming true; this game looks absolutely terrible. Its like they took all the stuff that made early TH games awesome and completely broke them.”

After all the complaints about the game’s physics, graphics, animations, power-ups and the environments, which many claimed were “uninspired” and “bland”, someone finally decided to give newcomers a base stratum for which to measure the current disappointment with this new game compared to what the series used to be.

The Filth Effect calmly pointed out…

“go and look how smooth thps3 is compared to this”

Well, Sargon Akkad – not to be confused with #GamerGate’s Sargon of Akkad – actually has a quick video showing some of the gameplay of Tony Hawk’s Pro Skater 3 that you can check out below.

Note: Music was removed to avoid copyright issues. -! Secret areas for every career level in Tony Hawk’s Pro Skater 3. Airport isn’t on the list, tho it also has a small secret area. Reason why I didn’t include it is because there is simply nothing there.

Objectively speaking, even though a lot of the automated blending techniques mentioned above weren’t around when Tony Hawk’s Pro Skater 3 came out, this game showcases a lot of smooth playability and animations for a game that was released back in 2001 for the PlayStation 2 and the other fifth gen consoles.

As for Tony Hawk’s Pro Skater 5… while gamers complaining about the issues in the video aren’t anything new, there were a few gaming outlets worried about this very thing well before actual footage came out.

Outside Xbox did a video way back on May 12th, 2015 before Tony Hawk Pro Skater 5 footage went public. They expressed the same concerns about quality control and playability issues well before anyone actually started complaining about them. They did a top 5 video that you can see below.

For those that don’t have time to watch, in the YouTube description they stated…

“It’s an admirable goal, but are they likely to achieve it? We’ve got our fingers crossed, but we’re still worried.

Outside Xbox’s worries have been confirmed now that the gameplay of Tony Hawk Pro Skater 5 has gone live and gamers have had a chance to react and respond to the game.

Tony Hawk’s Pro Skater 5 is due for release on September 29th for the Xbox One, PS4, Xbox 360 and PS3. If it manages to tank in sales again, I doubt it has little to do with the Tony Hawk extreme sports brand and more to do with the quality of the releases.