Between June 11th and June 21st the Steam Summer Sale will be underway, discounting games to absurd degrees as gamers scatter about to find enough money to dump into their PayPal account to buy whatever game they’ve lusted after to have in their library for months on end at the 75% off price. The sale has kicked off with a few notable games being available for temptingly low prices.

Some of the big games discounted includes the XCOM franchise, Hotline Miami 2, Farming Simulator and the Sniper Elite franchise to name but a few. There are even some Early Access games on the list with some deep discounts as well, such as Bugbear’s Wreckfest, the game that seems to have a lot of promise but can’t quite make it over that Early Access finish line, or Don’t Starve Together, which actually seems to be nearing the end of its Early Access run. 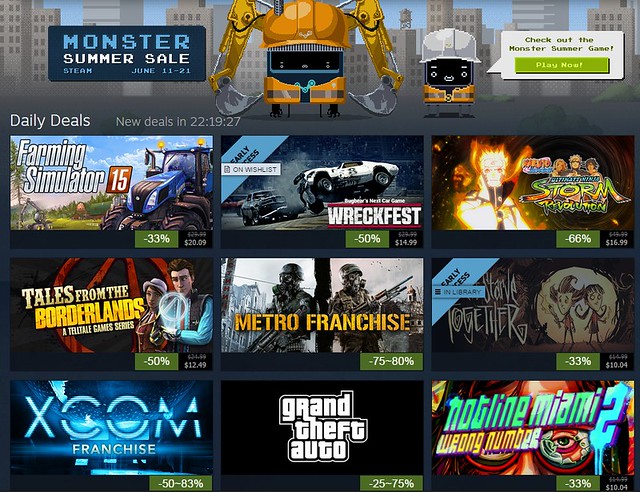 For gamers new to Steam, there are plenty of great games discounted for extremely low prices, from new titles that have just released like GTA V, which is available now for 30% off, or other older titles like Sega’s highly lauded and the sorely under-appreciated Valkyria Chronicles, which you can pick up for 75% off the normal price for only $4.99.

Steam’s summer sale is actually kind of earlier than expected, but they seem to want to get everyone to spend big now so they can save up and have some money left over when the time comes for the Steam Machines to launch this fall.

Due to Valve pulling the trigger so early on the massive heat-wave discounts, it now puts them in direct competition with GOG.com’s summer sale, which runs up to June 21st as well.

You can check out all the discounts and price-slashing savings going on at Steam by hitting up the official website.