Rogue Invader Puts Gamers In The Role Of Planetary Invaders

Recently making its debut on Steam Greenlight, Squishy Games’ Rogue Invader is an actual rogue-like alien invasion game where players will don the role of the invaders. Humans are fed up with aliens being planet-destroying chumbuckets and they’ve decided to reverse the trend by going to the home world of the foreign species and laying waste to everything in their path in an attempt to wipe out the entire population.

It’s a neat concept that’s similar to Hatred, insofar that players are on the offensive and are the ones attempting to destroy another race’s planet. The Greenlight page explains…

In Rogue Invader you are the invader attacking the alien horde in this genre-flipping roguelike shooter. “Game-play is smooth and resembles old-school isometric games, with modern touches and HD graphics.

“Twenty years ago, the zenos began invading terran colonies, leaving a trail of death and tears in their wake. Terrans fought back, one planet at a time, while building a fleet to stab at the zeno home-world.”

The trailer for the game gives you an idea of what to expect from the unique rogue-like shooter.

Rogue Invader comes to Steam with your help this Fall. Rogue Invader is now available for pre-order, reserve your copy here: https://squareup.com/market/squishy-games

The game centers around replayability. You can go through blasting down aliens and destroying their stuff with different results each time around. In fact, as you play through the game you can take the gear from fallen foes and research it to allow for a wider array of arsenal for your next drop, or you can just pick up the gun and use it while you’re trapped in the heat of battle. Think of it as the Rambo edition of X-Com.

The game also prides itself on its 1-bit graphics. Although they’re not really 1-bit and have a bit of grayscale in there, but it definitely appears to emulate the old C-64 games. 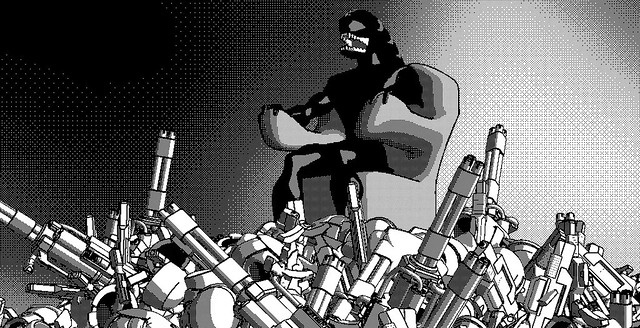 The rogue-like elements are what really help the game shine. Every time a soldier dies they stay dead, so for the next character you’ll have to outfit them with some nifty equipment to keep them from succumbing to the same fate as the soldier before.

You can modify the parts of the weapons based on what you scavenge and pick up on the battlefield, so each time you play (or each time you die) there’s something to be gained for your assault against the alien’s home world. 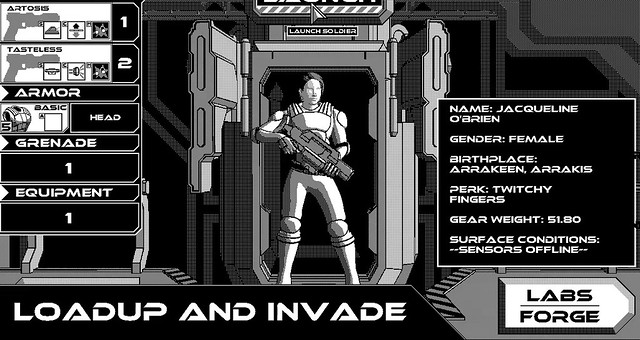 Also, the eight-direction side-scrolling view is a really neat touch to the typical shooter. It’s not often we get games like this and it’s similar to an alternate view of a game like Crusader: No Regret.

Rogue Invader is looking for a few good upvotes and favorites from the community. You can contribute to the cause by paying a kind visit to the Steam Greenlight page.