Hello Games’ Sean Murray has confirmed that No Man’s Sky will launch simultaneously on PS4 and PC… when it’s ready. This was confirmed during the super awkward PC Gaming Show that was sponsored by AMD and PC Gamer.

The PC Gaming Show… oh boy, what a low-budget, late-late-night affair that was. I’ll get to that too-poor-to-be-a-proper-trainwreck in a minute, but first up you’ll want to check out the new gameplay footage Hello Games had to showcase for PC gamers during the PC Gaming Show conference. You can check it out below, courtesy of PC Gamer.

As revealed at the PC Gaming Show, No Man’s Sky will be on PC. https://www.pcgamer.com

No Man’s Sky is an open-universe game where players can explore nearly countless planets and share their experiences with other players. The game allows you venture about planets, shoot things, scavenge things and upgrade your old things into new things.

Previously, everyone thought that No Man’s Sky was just a timed PS4 exclusive, but now we find out that it’s going to be a timed console exclusive with the game arriving first on PS4 and PC. It’s looking like a real beaut.

This was about as bad but not quite as bad as the VGX that Geoff Keighley and Joel McHale hosted, which felt like the aborted fetus of a talk show mutant that got knocked up by an escaped awards show mental patient. 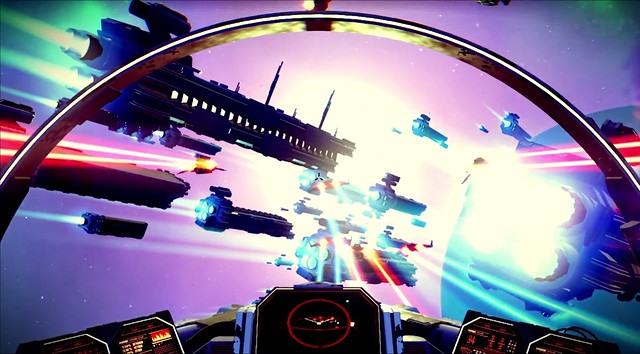 Instead, the PC Gaming Show was an embarrassingly small affair where the developers seemed like they didn’t want to be there and the budget didn’t seem as if it was put together well enough to support anything beyond confirming a lot of stuff we already knew or meager stuff that couldn’t fit within the limited time of the more important E3 conferences.

Nevertheless, there were some entertaining moments throughout the overtly long Talk Soup-quality affair, such as the mic going out during Hitman and the host having to lean in close so that he and the guest could share his mic, leading to the Twitch chat to shout out in unison: kiss!

Anyway, the show was more boring than it was entertaining and hopefully they can iron out something a bit more streamlined and entertaining the next time around. Mad props, though, to host Sean ‘Day[9]’ Plott who managed to work as the super glue to the whole thing which seemed like it was some deformed monstrosity made out of crusty construction paper that was desperately trying to fall apart and put itself out of its misery.

But enough about that. Who’s excited for No Man’s Sky on PC?