There are videos popping up all over the place for MotoGP 15 since it’s been a highly awaited game. Gamers are keen on seeing how well this newest iteration performs following on the previous outing, as well as the not-so-great MotoGP 13. A few videos highlight a walkthrough of the career mode and what’s like starting out, as well as the different control schemes and graphics differences between PC, PS4 and Xbox One.

YouTuber AlexZAfRo has a few YouTube videos of the career mode, showcasing how the game handles with a keyboard. Despite imperatively repeating how difficult it is to use the keyboard, Alex does a fantastic job of taking the turns tight, undercutting opponents for the overtakes and avoiding the understeer effect that’s so common when attempting to use a keyboard. You can check out his videos below.

If you’re more-so curious how well MotoGP 15 plays out between the three major platforms, including the PS4, Xbox One and PC, German gaming outlet PC Games actually has a threeway comparison. While the game is available for the PS3 and Xbox 360, they didn’t really want to focus on the old-gen consoles for the video.

The graphics comparison is just under three minutes long and doesn’t show you anything you wouldn’t have already expected from a game that’s practically identical across the eighth-gen systems and PC. You can see the video in action below.

Interestingly enough PC gamers were not pleased with the pared down rendition of MotoGP 15 for PC. The common complaint is that if the PC version can handle bigger and better, why is it not bigger and better?

Others, however, are just content that the game wasn’t gimped for PC like other recent releases such as Batman: Arkham Knight, which actually looked and ran worse on high-end PCs than it did on home consoles, especially if you were using an AMD card.

“Is it much of an upgrade to Motogp 14? Nope, not really. Cosmetics and small tweaks only (so far).

“Should the die-hard Motogp fans buy it? Absolutely, it has a nice feel to it and obviously it is updated with this seasons riders and such. It is still very much lacking in features that other driving sims have, hell even other sport games. But for the motogp series, it is slowly getting better…very slowly though.” 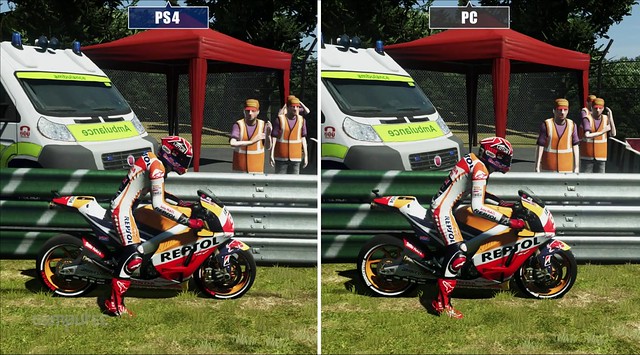 Milestone S.r.l., has been attempting to revitalize the motorcycle racing genre and they had a hit and miss outing in Ride and a slightly more positive reception for MotoGP 15, barring those who say it’s a MotoGP 14 clone or a standard console port when it comes to the PC version. Not everyone is pleased with the clone-esque approach Milestone is taking with the series, though, with an Amazon customer, YOSHI, writing…

“Let me be clear MILESTONE cannot release the same game next year, the fans and customers will not stand for it. If you dont have motogp 14 or 13 by all means buy it if you can find it cheap. Otherwise MILESTONE really need to get a NEXT GEN game engine and stop charging 50 quid for there games, for something that should cost 20 quid.”

So what do you think of the graphics and career mode from the little you’ve seen?

If you’re interested in MotoGP 15 you can learn more about it by paying a visit to the official website. The game is available right now for the Xbox 360, Xbox One, PS3, PS4 and PC.