According to the magazine and as reported by sites like Attack of the Fanboy, Final Fantasy XV: Episode Duscae 2.0 includes all new cooperation attacks and evasive maneuvers. It’s also possible to now mix and match combos with the ability to change attacks during combos. They also added the ability to charge great sword attacks and allows gamers to fight Catoblepas by the lake.

Camera control tweaks have also been added to version 2.0, making the camera easier and more fluent to control. 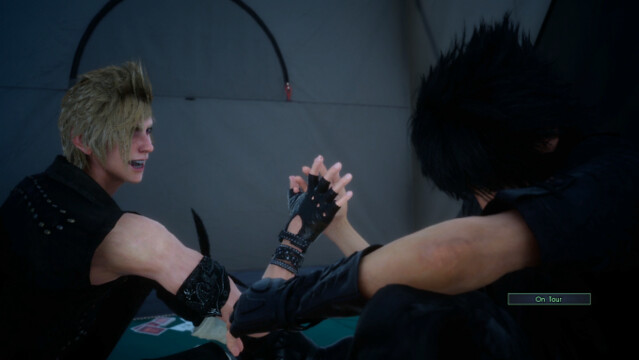 There’s more little things in version 2.0, which some folks are still discovering. It’s all very exciting though and it just goes to show how dedicated the team is to showing the fans how the game is progressing and what kind of direction the gameplay is taking in Final Fantasy XV.

“[…] there’s a lot of direct interactions between all the characters that have been added as well. One of the main themes of Final Fantasy XV is the journey that these characters go on together and they’re all supposed to be ‘close friends’, so now you’ll be able to get a greater sense of their friendships.”

Final Fantasy XV has been in development for quite some time. The game was originally announced as Final Fantasy Versus XIII and was going to be released exclusively on PlayStation 3. However, various development issues have made Square Enix rebrand the game as Final Fantasy XV, which is now being directed by Hajime Tabata and no longer by Tetsuya Nomura, now working on Kingdom Hearts III.

The latest trailer will give you a glimpse into what’s been recently added.

Due for release on 9th June 2015, the update to the playable demo for upcoming blockbuster title FINAL FANTASY XV, features impressive new features and enhancements. Check out this video which showcases some of the new things you can see and do!

That’s about it for updates on the progress of Final Fantasy XV for now. Be sure to let us know what you think of Episode Duscae version 2.0!