Platinum Games’ Transformers: Devastation was leaked a bit earlier than it was supposed to be just ahead of E3. The screenshots of the gameplay and part of the cinematics came online and gave players an idea of what to expect. Well, there’s a 10 minute video detailing some of the combos, weapons and special abilities.

The trailer for the game is pretty short and quick and gives you a truncated snippet of an idea of what to expect from the title.

The trailer above did little to explain what the gameplay would be like but many of the commenters were just happy that the game was hearkening back to the original Generation 1 Transformers look – the same look that made the characters and the property popular in the first place.

IGN also managed to get an interview with Activision and Platinum Games and rolled out a 10 minute video that shows how the Transformers can utilize combos to take down foes. Players will only be able to play as the Autobots and they can very quickly transform into vehicles and use it either as a way to escape danger or as part of the combo process, where players can go back and forth with their combo tactics to create custom combinations. You can see it below.

Check out gameplay for Transformers Devestaion at E3 2015. The video begins at 0:19

If the game seems to look a little like previous Platinum Games titles it’s because all of their games are based around a core engine concept and then molded and shaped to match the property they’re working with, such as Legend of Korra and Metal Gear Rising: Revengeance.

In this case they stripped the engine down and reshaped some elements to help bring the Transformers to life. However, core things like creating a basic combo and then canceling and restarting the combo as an aerial manual is completely possible, as showcased with Bumblebee at the 6:15 mark. 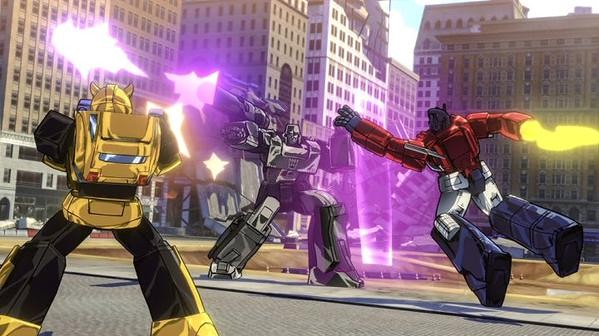 Transformers: Devastation is set to release on the Xbox 360, Xbox One, PS3, PS4 and PC this fall. You can check out the official website to learn more about the game.