A seafaring, multiplayer, adventure RPG. That’s the best way to describe Rare’s new venture for the Xbox One called Sea of Thieves. The new IP was announced during Microsoft’s press conference at E3 this year and the announcement trailer was an impressive bit of visual mastery.

The game has a colorful vibrancy about it and the whole thing starts off as if it’s another dark and scary survival title. However, things pick up and change in tone when it’s discovered that other players are venturing around in the game world and that there’s a big ‘ole pirate ship awaiting them just off the shore of the beach.

You can check out the E trailer for the game below.

The announcement trailer was met with a lot of positivity and strong supportive feedback from the gaming community. With Equiness Kimbrough simply stating…

The significance of that statement rests in the recent past where Rare has been used mostly for low-rent Kinect titles – pumping out casual fanfare that stripped the company of their previous stature as being known for producing quality, unique titles. 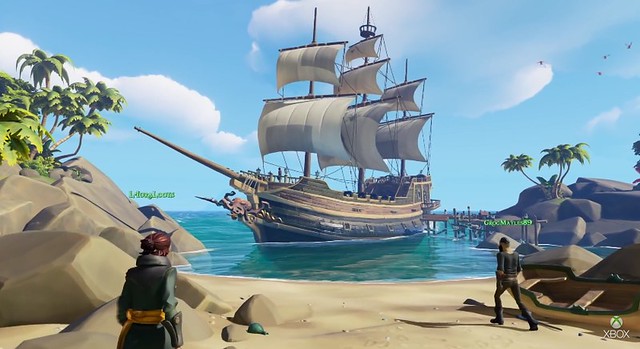 Rare is known in most core gaming circles as a company that’s just a shell of its former self, no longer being allowed to dare to risk time and energy on games with memorable and historic payoffs, such as Conker’s Bad Fur Day or the original Killer Instinct.

In fact, the classics from Rare have been so beloved that even Microsoft decided to cash in on their once illustrious and well-respected name with the Rare Replay, a 30 game pack for $30 containing many of Rare’s classics. This is all done in celebration of the company’s 30th anniversary celebration.

Celebrate Rare’s 30th Anniversary with a jaw-dropping collection of 30 iconic games, lovingly presented for Xbox One.

Gamers get to tackle all the classics and enjoy many of those memorable moments from the highspots of Rare’s 30 year run in the gaming industry.

As for Rare’s present and future… Sea of Thieves has a lot of potential. Of course, multiplayer pirating has just as much that can work amazing and go right as rain water for the company as it can go wrong. Hopefully we’ll get to see more of Sea of Thieves soon and understand what the extent of the gameplay is like and just how much control gamers will have over the gameplay experience.

In the meantime you can keep your eyes on the game by paying a visit to the official Sea of Thieves website.