A new game from Comcept’s Keiji Inafune and Armature Studio called ReCore is due for release on the Xbox One in spring, 2016 next year. The game was briefly showcased during Microsoft’s E3 press conference but no actual gameplay or details about the gameplay were made known.

Gamers will take on the role of one of the last humans surviving in a hostile environment. The trailer hints at what sort of gameplay players will encounter throughout their journey. Basically, enemy robots can be killed and you can use applicable cores in various other machines and robots and build up a stable of companions and allies, a little bit like a machine-oriented rendition of Monster Rancher. You can check out the CG debut trailer below.

Presenting ReCore an XBOX ONE EXCLUSIVE from the legendary creator Keiji Inafune and the makers of Metroid Prime. As one of the last remaining humans, forge friendships with courageous robot companions and lead them on an epic adventure through a mysterious, dynamic world.

The trailer hints at players being able to take the cores from fallen comrades and reinstalling them in another shell to bring the companion back to life. The press release is extremely thin on details about the game despite being several hundred words long.

“Throughout the adventure, you will encounter a variety of enigmatic robots. Many will be foes bent on your destruction, but some will be courageous companions for you to bond with and lead in battles during your epic adventure.” 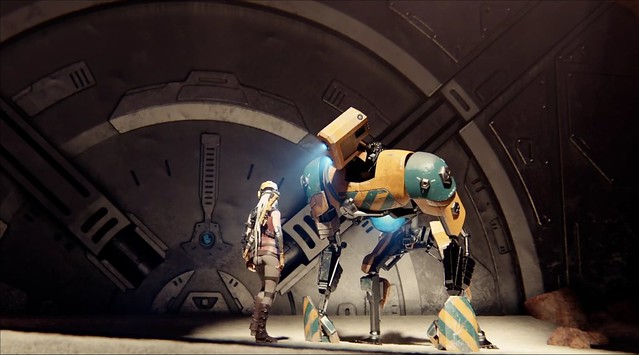 The game is being designed by the veterans who brought you the Metroid Prime series. The game will have a strong focus on exploration and adventure and will sport plenty of dungeons, wastelands and deserts for players to traverse, dealing not only with killer robots but environmental hazards as well.

There’s no way to know for sure just how well this game will turn out, but the cinematic was somewhat compelling. The concept could work out well with the right balance of combat, exploration and stable management. I do wonder if the game will sport stats and RPG-style leveling or if it’ll be more static and about the journey as opposed to the micromanagement process? I guess we’ll find out more as the game progresses through development.

You can keep an eye on the game as it moves toward its early 2016 release by checking out the official Armature Studio website.