E3 2015: Mother Russia Bleeds Is One Of The Most Violent Games You’ll See

Le Cartel and Devolver Digital unleashed a gameplay trailer for Mother Russia Bleeds. The game is chock full of shocking, gruesome, violent imagery. There’s a fetish club where people are strung up and stripped of their flesh. Bad guys will be pummeled into literal piles of bloody pulps. Guns can be used to blow the brains out of enemies, complete with seeing their brain matter fly over the screen and run across the floor. This folks, is Mother Russia Bleeds.

Jstationx does a brief rundown of the game, explaining that players take on the role of an imprisoned drug addict who goes out to get revenge against the people who imprisoned him. He’s joined by a couple of other hardened ruffians as they tear through Russian’s criminal underground and literally tear through anyone who gets in their way. 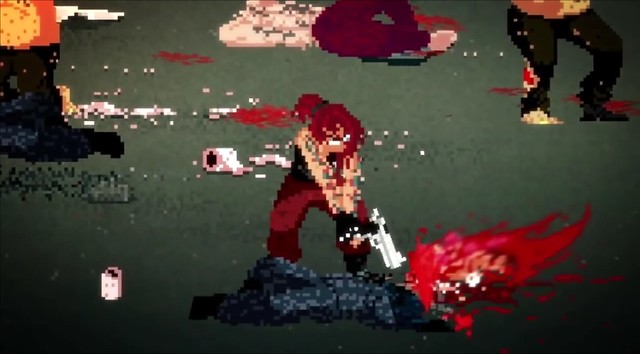 You’ve got to love seeing toilet tissue rolls scattered about the floor, especially since they aren’t in a bathroom.

The game itself seems to be a mix of Knuckle Bash meets Manhunt 2 meets S&M bondage fetish. It’s a strange looking game with a disturbing set of imagery, but at the same time, the action looks righteous and the animations are pretty solid for a beat-’em-up title. Players can unleash standard combos, grab moves and specials, all while having access to weapons and items scattered around each stage that can be used to clobber, bash, stab, shoot and maim opponents.

You can see how Mother Russia Bleeds plays out in the gameplay trailer below.

Coming to PC and PlayStation 4 in 2016. https://motherrussiableeds.com Mother Russia Bleeds is an ultra-violent co-op brawler overflowing with an unmistakable style and unforgettably brutal action for up to four players at once. Set in an alternate U.S.S.R, the story centers on a desperate crew of imprisoned street fighters that must overcome an oppressive criminal authority and crippling drug addictions through any means necessary.

JstationX notes that the game will have dynamically adjusted soundtracks to match the action on-screen, a four-player cooperative mode, and pixel art that’s infused with graphical effects that are ripe and ready for utilization in today’s technologically advanced gaming arena.

You can look for Mother Russia Bleeds to launch in 2016 for the PC and PS4. Need to keep an eye on the game? Feel free to check out Devolver Digital’s official website.

4 thoughts on “E3 2015: Mother Russia Bleeds Is One Of The Most Violent Games You’ll See”