Square Enix and Avalanche Studios have set the official release date in place for the exotic, open-world action game, Just Cause 3. The game’s release date was announced during Square’s E3 press conference where they also unveiled a brand new gameplay trailer for the hotly anticipated action title, which is due to drop on December 1st, 2015 for PC, PS4 and Xbox One.

The new trailer is an amalgamation of high-octane driving, blooming explosions and plenty of gunfire. You can see it in action below.

This Is Just Cause 3

This Is Just Cause 3. Watch this trailer to find out everything you need to know about the biggest, most explosive, open world sandbox in gaming. Want to be a part of the Revolution? Visit https://www.justcause.com and follow us on: Twitter: https://twitter.com/justcause Facebook: https://www.facebook.com/JustCause Instagram: https://www.Instagram.com/JustCauseGame

We get to see some really neat features on display, like running vehicles into specific points of a structure to cause the integrity of it to become compromised, resulting in the structure falling in. That’s the kind of thing we’ve grown accustomed to in games like Medieval Engineers and Space Engineers but not something we’ve seen regularly from other fast-paced action titles like Just Cause. It’s nice to see Avalanche Studios taking a more dynamic approach to physics-oriented destruction as opposed to just having preset animations or static physical deconstruction from various structures.

“Just Cause 3 is one of our most anticipated titles and we’re excited to build on everything the community loved about Just Cause 2,” … “With a beautiful 400 square-mile sandbox, Just Cause 3 will offer players almost endless hours of creativity, destruction and awe-inspiring stunts this December 1.” 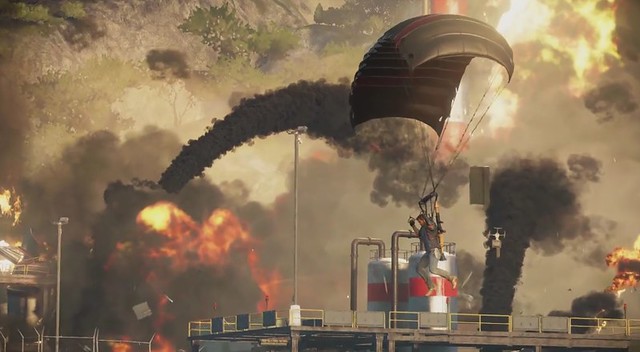 The trailer alone introduced a lot of cool looking segments and great action sequences that make Just Cause 3 look like it’ll be a bucket load of fun.

I was originally worried that Avalanche Studios might be cannibalizing their own efforts having Mad Max and Just Cause 3 release so close together, but it’s quite obvious that both games are very different from one another as far as core gameplay goes. But I’ll be honest, I’m a bit more enamored with Mad Max at this point over Just Cause 3.

You can learn more about the new title starring Rico Rodriguez by heading on over to the official Just Cause website.