Bandai Namco Games released the latest trailer for Godzilla called “Ultimate Mayhem”. The title of the trailer fits it well because it finally gives more focus on what you do in the game and how you progress, as well as profiling each of the kaiju that will appear and will be playable in the monster destruction game.

Analog Addiction spotted the new trailer for the PS3 and PS4 title amidst the torrent of trailers, screenshots and media assets made available for the dozens of games on display at this year’s E3. You can see the new trailer below.

So the main mode basically sees gamers taking on the role of the king of monsters himself, Godzilla. He battles it out with other monsters while sucking up energy and growing stronger along the way. The game is a lot like the old King of Monsters game or Rampage, where players are required to destroy a specific amount of objects and structures before battling the boss and moving on to the next stage.

The game has a strnage old-school look and feel to it. I’m assuming they were designing the game to replicate the old Toho series, where there was more of a focus on the cheesy destruction and over-the-top special abilities of the monsters, as depicted in the trailer when Mechagodzilla does his trademark fingertip laser firing. 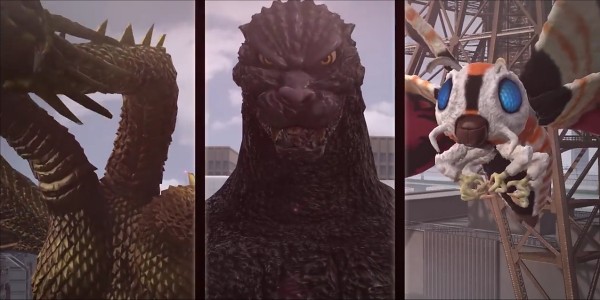 The game seems like the sort of pastime venture where you pick it up play it just to blast things and blow things up for the heck of it. Graphically the game is nothing to write home about but the three-way monster battles is an interesting concept. I also like how you can unlock newer and different variations of the same monsters. That definitely gives some fans a reason to keep on playing and unlocking stuff along the way.

Godzilla is due for release on the PlayStation 3 and PlayStation 4 on July 14th in North America and July 17th in Europe. You can learn more about the game by heading on over to the official Bandai Namco Games website.