Wondering how downgraded Deus Ex: Mankind Divded looks in-game compared to the cinematic trailer? Well, not that downgraded at all. While the full game is still a ways off from release, the newest gameplay trailer at least gives gamers an idea of what Eidos Montreal is shooting for with the upcoming game on home consoles and PC.

During Square Enix’s E3 press conference they rolled out the first gameplay trailer for Deus Ex: Mankind Divided and explained a little bit about the game. Adam Jensen is now working for an elite group at Interpol after leaving Sarif Industries. It’s two years after the events of Deus Ex: Human Revolution and cybernetic transhumans are hunted down and quarantined away from the rest of society. People fear the augments. This leads Jensen into a quest to discover who is truly behind the Illuminati and how he can possibly get Alex Jones to stop shouting so much. No, I’m kidding about the Alex Jones part but most of you probably wish that I wasn’t.

The gameplay trailer itself doesn’t actually reveal a lot of actual gameplay. We do get to see a few of Jensen’s new abilities in play, such as his ability to turn into a shielded , armored polygon man. I imagine that’s a neat trick for people who likely will take the loud and violent route through the game.

We also see the projectile arm blades in action and the wrist-mounted EMP device that disables augmented individuals. 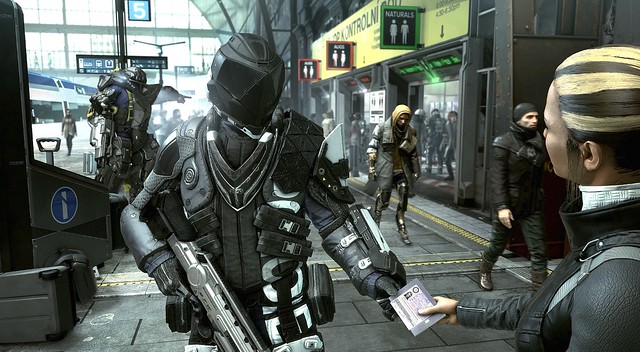 Most impressive to me is that so far the game actually looks a lot like the cyberpunk concept art that we all envisioned Deus Ex to look like, but previous gen’s hardware prevented that vision from coming true. The gameplay this time around looks awfully close to to the cinematics and that’s a huge step up from the jarring difference in the cinematics presented in Human Revolution to the downgraded gameplay graphics that console gamers ended up getting stuck with.

Again, details on Deus Ex: Mankind Divided are thin, but we do know that weapon customization is back, open-world traversal is apparent and the ability to shape and sculpt the world through player-made decisions returns.

You can keep an eye on Deus Ex: Mankind Divided, which is due for release in early 2016 on the Xbox One, PS4 and PC, by heading on over to the official website.