Some of you may have already started digging in deep on the Steam Summer Sale, but it’s important to note that not all discounts are discounts done in good faith. Some of these are discounted after going through a brief price hike, so it seems like you’re getting the game in a nice little bargain deal but that’s not entirely the case.

There’s a thread over on the official Steam sub-reddit where they warn gamers to keep an eye out on prices raised just for the sake of adding a percentage by it to give the impression that it’s cheaper than what it is. They do note that it was a tactic used by DayZ when it first launched, as well as by Gaijin Entertainment for War Thunder with some of the DLC packs a year ago during the Steam Summer Sale.

The post notes that deceptive pricing is unlawful in many regions, including the United States of America. It’s listed over on the FTC under title 16, chapter I, sub-chapter B, part 233, where Reddit user LegionVsNinja points to section 233.1 for reference regarding deceptive pricing, which reads…

“If, on the other hand, the former price being advertised is not bona fide but fictitious—for example, where an artificial, inflated price was established for the purpose of enabling the subsequent offer of a large reduction—the “bargain” being advertised is a false one; the purchaser is not receiving the unusual value he expects. In such a case, the “reduced” price is, in reality, probably just the seller’s regular price.”

Users also notify that users in New Zealand should also be wary of this law, where deceptive pricing is unlawful according to the Fair Trading Act as noted on the official FTA Government website. The ACCC also have a clause about deceptive pricing on their website — and take note that the ACCC is the same organization that helped pressure Valve and EA into adding refunds to Steam and Origin.

There’s even an example of how deceptive pricing can be used by retailers to deceive customers, with the FTC rolling out the following guideline….

“The following is an example of a price comparison based on a fictitious former price. John Doe is a retailer of Brand X fountain pens, which cost him $5 each. His usual markup is 50 percent over cost; that is, his regular retail price is $7.50. In order subsequently to offer an unusual “bargain”, Doe begins offering Brand X at $10 per pen. He realizes that he will be able to sell no, or very few, pens at this inflated price. But he doesn’t care, for he maintains that price for only a few days. Then he “cuts” the price to its usual level—$7.50—and advertises: “Terrific Bargain: X Pens, Were $10, Now Only $7.50!” This is obviously a false claim. The advertised “bargain” is not genuine.”

A perfect real world example of this is from the Steam Prices website, which shows the markups and markdowns of games and their SRP on Steam. Notice, in particular, Grand Theft Auto V in the image below. 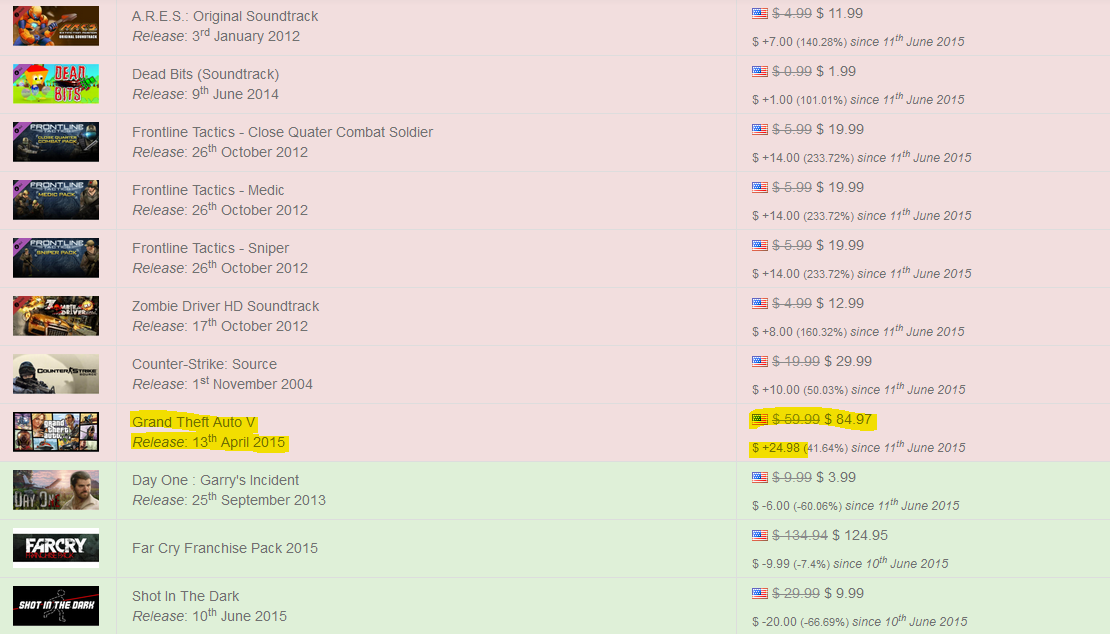 As of June 8th, 2015 an image of the Steam store page was captured and archived of Grand Theft Auto V indicating that the game was available for $59.99. There were no bundle packs available for $79.99 or $84.97 according to the image above. You can see the comparison in the image below. 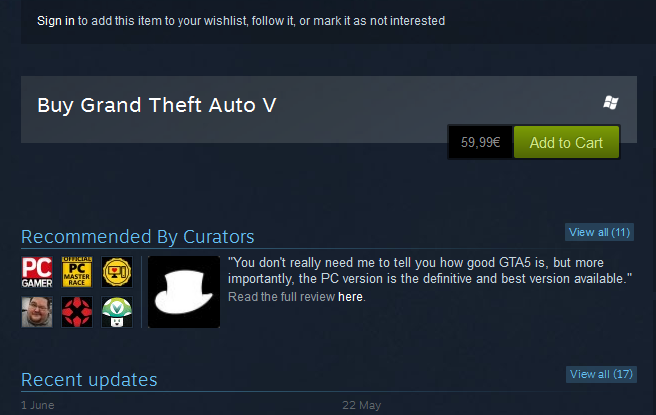 A few days ago, there was no $79.99 standard retail distribution price or bundle for Grand Theft Auto V, as evidenced by the June 8th, 2015 archive capture. Once the Steam sale got underway the price has been marked up with a 25% discount, bringing it back down to the standard retail price. The only difference is that it now includes a “Great White Shark Cash Card”, which regularly sells for $19.99, a content item that also wasn’t listed on the store in the June 8th capture of the page.

Now, the bundles with Max Payne 3 and GTA V are fine since they’re two completely separate products being discounted during the sale. But adding a cash-shop bundle pack and then discounting the price the day of the sale and making it the normal $59.99 price seems intent on cashing in on the discount craze, even though the price is the same as the SRP.

I did reach out to Rockstar via multiple points of contact and will update the article if they decide to respond.

In the meantime, be wary of these kind of deals during the Steam Summer Sale and don’t hesitate to contact the FTC about deceptive pricing models from publishers, distributors or retailers. Be sure to include detailed information about the instance and screenshot and archive everything. You can learn more about filing complaints with the FTC by visiting the official FTC.gov website.