Digital Foundry released their much-anticipated and highly expected frame-rate and graphics comparison between the Xbox One and PS4 versions of Project CARS. Slightly Mad Studios has added a few options to allow players to tweak the gameplay experience of the crowd-funded racing game, which means that if you’re playing on settings that can’t hit 60fps you can always make some adjustments so you’re hitting the frame-rate g-spot without fail.

The tests Digital Foundry ran were pretty apparent and undeniably evident that eighth-gen won’t have a lot of leg room to grow when it comes to games that not only push the graphics boundaries but also go for high on-screen object count and post-processing effects. The tests revealed what most people have known for a while: The PS4 is more powerful than the Xbox One and the Xbox One has a resolution deficiency that usually sees the big AAA titles relegated to 900p. In the case of Project CARS, the PS4 version runs at 1080p and the Xbox One runs at 900p.

It was noted in the Digital Foundry article that the Xbox One had lower shadow resolution and some graphical effects compared to the PS4.

Without rain effects on, and with a grid of 20 cars, the Xbox One hovered around 50fps through 53fps when the screen was cluttered with AI racers, where-as the PS4 stabilized around 60fps, occasionally dropping down to 55fps. 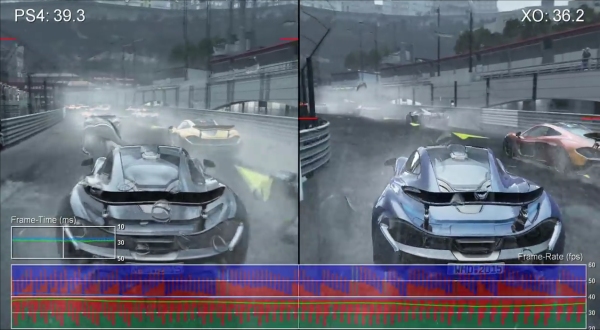 With 40 cars and the weather set to heavy downpour the Xbox One struggles at 36.2fps while the PS4 fares only slightly better at 39.3fps.

It was interesting in the comment section of the article, one user named GamerBhoy89 wrote…

“Being a console gamer for as long as 21 years, this has always been a thing. Most console games never maintain the intended fps. It has never been off-putting for me. I honestly don’t understand why it’s such a big talking point in games these days.

“I understand this is what Digital Foundry does, I’m not taking that away from them. But I just can’t wrap my head around these analyses and why it’s such a justified reason to go with one version of a game over another.”

One thing worth noting is that if you’re used to playing on console and don’t switch to PC at all, low frame-rates are sometimes looked at as acceptable. If, however, you ever have an opportunity to play games properly, without input lag and at a steady 60fps, it makes a world of difference. Your eyes are no longer straining in between screen tearing and frame drops, and you’re no longer trying to cognitively adjust your reaction times based on input lag.

If you’re looking for an uncompromising 60fps experience, Project CARS seems as if it’s best played on PC. If you can handle drops during a heavily populated grid and torrential weather effects, you can settle for the PS4 version. If you have nothing but an Xbox One… well, case closed.