Some new DLC for Payday 2 has launched called The Butcher’s Western Pack. It contains all new melee weapons, all new firearms, all new mods for the firearms, as well as some new masks to deck out the Payday crew with.

To help introduce the new mods, Overkill Software dropped a quick new machinima to give gamers an idea of what to expect from the new DLC pack. You can scope out the funny little video below.

WANTED! Dead or Alive! Out on April 30. https://www.overkillsoftware.com/games/butcherswesternpack/

So if you weren’t paying close enough attention to the new gear, the new weapons include a stick of dynamite. Not much you can mod with dynamite, but it works. The next is a new bow and arrow kit, it comes with an explosive arrow mod. The Winchester 1874 repeater rifle is also included, it comes with three separate barrel modifications. The classic Peacemaker .45 is the revolver we see in the clip above, you’ll be able to deck it out with three different mods.

In addition to the four new weapons named above, you’ll also be able to exercise your expertise with four new melee weapons, including a tomahawk, a gold fever pickaxe, an Arkansas tooth picker knife, and a long-tail branding iron. 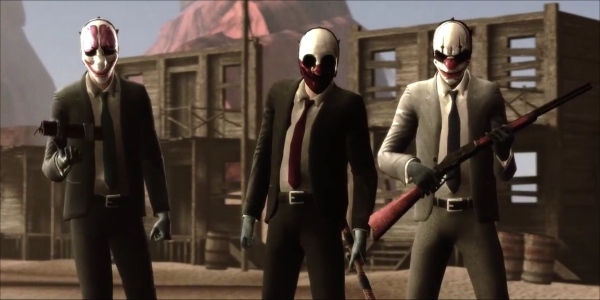 Four new patterns and styles have also been added, along with four new masks that you can customize, including a wild west bandit mask, a desert skull, an Apache mystic and a “Lone Heister”… obviously modeled after the Lone Rider.

Overkill Software has plans to continue to support Payday 2 for a long while to come and they don’t seem to have any shortage of ideas when it comes to new weapons and customization features for the four heisters.

You can pick up the DLC for only $4.99 on PC or learn more about the content for Payday 2 by paying a visit to the game’s official website or you can skip the pleasantries and pick up a copy by heading on over to the Steam store page.