A game about Japanese pop idols fighting off a wave of invading darkness using their super idol powers and dance routines sounds like something out of a Saturday morning kids cartoon, but that’s the basic premise behind Galapagos RPG and Idea Factory International’s Omega Quintet for the PS4. A walkthrough for the game has emerged giving gamers a look at the gameplay, the cutscenes and the combat.

The basic premise behind the game’s story is that a force known as the Blare warped minds and created monsters, it was basically a spreading darkness. Humans have had to retreat to outlining cities to survive. The only thing that can stop the Blare? Well, Japanese pop singers of course.

R3D PlayStation Filmer has more than 60 videos of the game. Yes, it’s a real doozy. The combat system is oddly unique insofar that it combines the combo bar from Legend of Legaia with the range meter from Oreshika: Tainted Blood. You can check out his complete gameplay walkthrough below.

The game allows players to run around in semi-open environments, beating down the bad guys, leveling up the girls and earning new abilities along the way.

Each of the characters have their own combat techniques, skills that can be leveled up and mic energy attacks, think of it as magic. As players grind through the game new attacks and moves open up, allowing the party to take on bigger and more dangerous foes. There’s a lot of nuances and layers to the combat system as the game progresses that allow for links, combos and counters to fight off some of the more difficult baddies in the game. 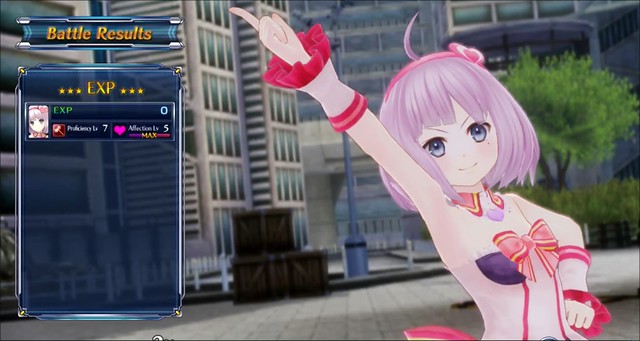 One of the other gimmicks in the game is the PVS or Promotion Video System, which allows players to exercise the ability to put together stage concerts. It’s a side activity to add a bit of flavor and uniqueness to the game. Players can choose the music, the dance routines and the camera work and make short music videos featuring the in-game pop idols.

Omega Quintet originally launched in Japan back in late 2014 but recently became available for the PlayStation 4 in North America and Europe this spring. You can pick up a copy of the game right now or learn more by paying a visit to the official website.