Heroes Of The Storm How To Earn Gold Fast

Heroes of the Storm is now in open beta and a flood of new gamers are signing up to play. In doing so it means that a lot of newbies are curious how to earn gold, unlock the heroes they want to play and do so without paying out an arm and a leg in real life money. Luckily, newbies can learn how to farm gold fast and easy using a guide that offers a few quick tactics to help elevate the daily playing session.

YouTuber Rhykker has a 12 minute video detailing how to farm gold fast using dailies, basic leveling strategies and some recent new updates that Blizzard tossed into Heroes of the Storm. You can check out the video below.

A Heroes of the Storm guide on how to farm gold as fast as possible, and how much gold you can expect to get on a daily basis.

So the basic gist of it is that you can play the tutorials and earn 1,000 gold just for completing the tutorials. 250 gold for the first two tutorials and 500 gold for the third tutorial. Rhykker states that you’ll need well over 26,000 gold if you want to to afford enough heroes when it’s time to do Hero League, so while you can earn some quick cash from tutorials, you’ll need to maximize your efficiency in a few other areas to farm gold fast without cheating or glitching in Heroes of the Storm.

One thing to keep in mind is that you’ll also earn gold at various level intervals just for progressing through the player ranks. You’ll also get 500 gold every time a hero is leveled up to level 5. Rhykker estimates it takes about nine matches to get to level 5 for a hero but it may vary based on your performance per match. He suggests playing the matches with friends who are on your friends list. 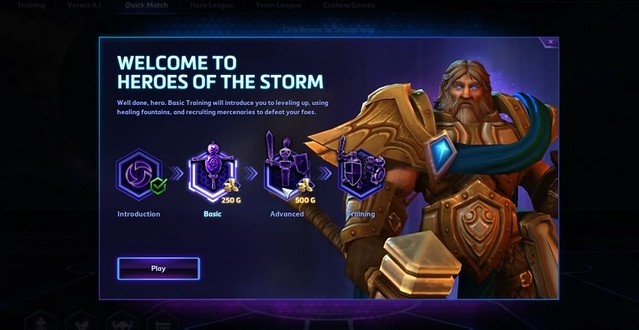 One thing Rhykker notes is that you can knock out two quests at once if you, for instance, complete two daily quests such as playing two games as a Warcraft hero and playing three games as a Specialist, you could pick a Warcraft specialist and play them across three games to nab both quests in one session.

While the tips offered in the video aren’t equivalent to a gold generator for Heroes of the Storm, it’s probably the next best thing. You can sign-up and start playing the free-to-play MOBA title right now by heading on over to the official website.