Love The Fast & The Furious? Want to perform some hot drag racing wheelies in your muscle car just like Torretto? Well, now you can… in GTA V. A new mod has been released that not only allows players to perform wheelies in cars but it also features real drifting, modifying the physics in GTA V to be a little bit closer to the likes of GTA IV. The mod also includes some very dynamic 4×4 offroad driving physics, too.

GTA Series Videos did a brief showcase of the recent releases of the mods, including the drift mod, the wheelie mod, a super BMX mod and a mod for James Bond’s DB6 that allows players to shoot explosive bullets. Check out the video below.

I’m glad people are starting to modifying the car handling in GTA V because it seems like the cars move around like they’re on tracks or something. They don’t feel like they have proper roll and physical weight reactions. The cars seem like they’re bolted to the ground and moving along the road like a trolley car. The drift mod doesn’t quite fix that problem but it comes close.

You can grab the drift mod from GTA5-mods.com. I’m assuming it’s been vetted and ran through the cleaners to avoid spreading any digital diseases. 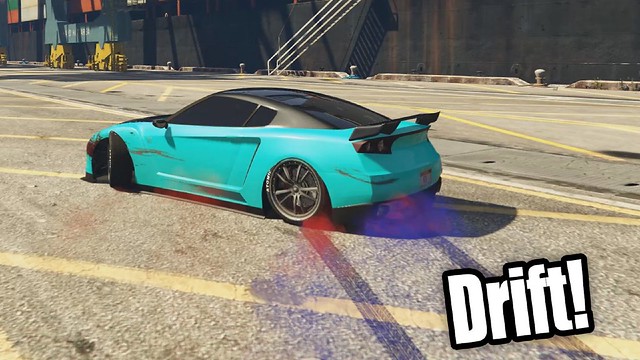 The mod comes at a time as modders are finally getting comfortable editing files in GTA V after the OpenIV team took the time to break open Rockstar’s encryption process. Gamers can now modify the game and swap out textures, edit the population, time of day and handling data. At the moment, model swaps are still not possible just yet but it appears as if it’s coming sooner rather than later.

For now I think most PC owners are just happy that there’s at least a way to modify and edit some aspects of GTA V. The script mods have also really taken off as well, giving gamers plenty to mess around with and tweak as they wait for the final piece of the puzzle – the model swaps – to go live.