Global Games Market To Hit $74.2 Billion In 2015, According To Superdata

It looks like there’s a bit of a head-to-head battle going on when it comes to annual game reports. The newest report from Superdata Research indicates that the gaming market will hit $74.2 billion in 2015, as opposed to the $91.5 billion figure that Newzoo came up with just a short while ago.

Some of those numbers seem a little odd given that Tech in Asia reported on a market report from Go-Globe that had China’s online game operators bringing in revenue of $13.5 billion back in 2013. Somehow the numbers aren’t quite adding up if Superdata is accounting for global game sales – because even if we include $1.5 billion from the pay-to-play MMOs with the free-to-play MMOs, globally that would only put it at $10.2 billion globally. That’s $3.3 billion less than what China alone brought in back in 2013.

Nevertheless, you can check out the infographic below to see how Superdata broke down the revenue streams per category. Although, they don’t break it down by region the way Newzoo did. 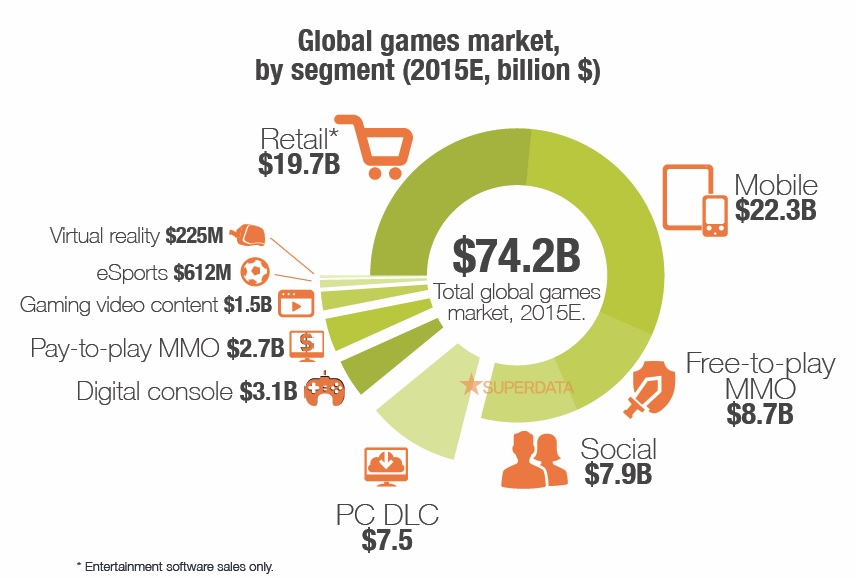 As the industry has changed, so, too has the audience,” … “Already did we establish that gamers today are not the same ones who have traditionally been considered its core audience. But now that gaming is mainstream, audience behavior is different, too. Today, people don’t just consume entertainment but increasingly play an active part in it. Ranging from modding to streaming, from cosplay to competitive gaming, the market for gaming presents a much broader and more diverse mix of opportunities and challenges than ever before.”

This is kind of annexed to what was mentioned back in April by Superdata on their talk about “Gamers Are Dead. Long Live Gaming”, where they had a discussion about what it means to be a “gamer” and how the trends were changing, stating…

“With 1.2 billion gamers worldwide, gaming is now mainstream. And because of that it is evolving in unprecedented ways. Where we play games is changing: no longer confined to dedicated consoles and PCs, the time spent on mobile gaming is poised to take over. Where counts as gaming is changing: it is not just something you do, but also something you watch. The rise of platforms such as YouTube and Twitch has made gaming into a spectator sport. Who gamers are is changing: in 2013, adult women became the largest gaming demographic, unseating teenage boys. These three trends merge and overlap to question what it means to be a “gamer”, and simultaneously expands what we mean what we talk about gaming.”

I hate to gamedrop but it sounds like they’re using the media’s narrative of #GamerGate to maintain this idea that somehow the core gaming audience isn’t as much of a driving force as it used to be. That core audience never went away (much in the same way that core football fans never went away even though a bunch of non-fans tune in to watch the Super Bowl each year) and the idea that the casual markets will bud and overtake core gaming is kind of silly.

What happens is that casuals pop in and out of gaming like a fad – remember Angry Birds? Remember Temple Run? Remember Candy Crush or Bejeweled before it? Right now the hotness is Clash of Clans, but in the past decade how many of those popular mobile titles became established brands? How many of them are gaining recognition or market mindshare where people actually remember what they are or care about their sequels long after the whales dry up?

Within the past decade in the core sector games like Assassin’s Creed (for better or for worse) has managed to become a recognized brand in both console and PC gaming. There’s iconic imagery to match. Gears of War is also an established brand within the past decade, having recognizable imagery and characters to boot. Team Fortress 2, World of Warcraft and God of War are just a few more, along with The Last of Us, League of Legends and Uncharted. While there are definitely huge problems in the core sector of gaming, it’s a sector known for growing brands and by proxy growing audiences. Mobile gaming is known for its cash-bait and that’s the primary reason why so few of their games have staying power, with the exception of Angry Birds.

In result, mobile gamers ebb and flow to whatever is new and hot at the time, playing mobile games when it’s convenient for them to do so or they’re inconvenienced from doing something else. It’s a wildly fluctuating market with its sustenance being embedded in its ubiquity, as opposed to having any established or recognizable features or qualities (aside from convenience) to lure in and keep gamers playing.

Anyway, Superdata’s numbers are a little suspect only because it doesn’t synch up with the available data that has already shown that in the past years some markets are already making more in some sectors than what the report accounts for. Someone’s numbers are off.

Even still, at least it gives us an interesting look at the market value of gaming.

One thought on “Global Games Market To Hit $74.2 Billion In 2015, According To Superdata”