One way of generating traffic for a website is purchasing a website for a game that’s just about to be announced and then having that website direct traffic to the website you work for. Almost sounds a bit like insider trading, right? Well, that’s what happened when a news editor and games journalist for Polygon purchased the Lego Dimensions domain ahead of the game’s official announcement and then had the website redirect back to Polygon for some extra traffic, as evidenced with the archived article  here.

Games Nosh and Game Zone both captured tweets from Polygon news editor Michael McWhertor who mentioned that he had purchased the domain ahead of the official announcement by Warner Bros. Entertainment and TT Games.

“Warner Bros. Mashing up Batman, Back to the Future, The Lord of the Rings and The Lego Movie for a toys-to-life game […] Also, glad I registered legodimensions.com yesterday :D”

“Here’s my super secret insider info about how I knew there might be a video game called Lego Dimensions [links to Videogamer.com article from March 20th, 2015]”

“OK here you go. Sorry for trying to do a funny thing. Have a nice day. Legodimensions.com”

According to the Game Zone article, the Videogamer.com article doesn’t actually have any information about the announce date for Lego Dimensions. After poring over the article, it’s true that it doesn’t contain any announcement date information other than that Lego Dimensions could be the working title for the at-the-time unannounced and unconfirmed game. How McWhertor gathered the initiative to make the purchase of the website ahead of the official announcement with so little to go on has some gamers calling foul.

Kotaku journalist Jason Schreier laughed it off but lawyer Mike Cernovich added a bit of context to the dangers of cyber-squatting on a domain for a trademarked IP. 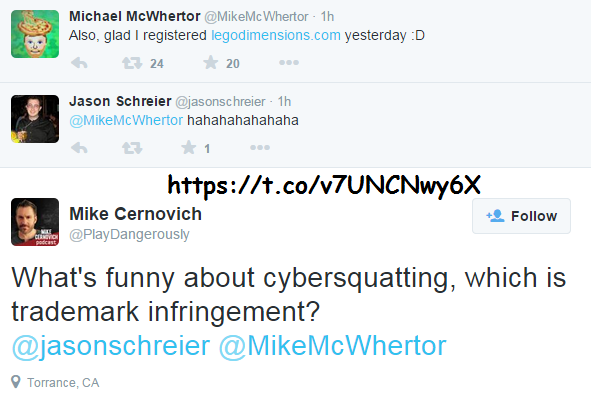 Not only is it trademark infringement but domain squatting is illegal. According to the Internet Library, under Anticybersquatting Consumer Protection Act (ACPA), 15 USC §1125(D) the act is designed to prevent squatters from buying domains in association with registered trademarks in order to sell them back for a profit. As mentioned in the article on the Internet Library…

The ACPA has been effectively used to combat a number of wrongs. These include “cybersquatting,” which occurs when a registrant obtains a domain name containing another’s mark and offers to sell it to the mark holder for a tidy sum.

If you think this is some minor offense that can be hand-waved away, it’s actually quite serious. According to the law…

Nevertheless, McWhertor turned over the domain to the Lego Group. [Edit: Originally it stated that McWhertor sold the site back to Lego Group but that was incorrect, he spent $13 to acquire the website.]

I just transferred ownership of the https://t.co/D0EKJXBHa0 domain to the Lego Group. That was a fun use of $13.

I did reach out to Polygon’s editor-in-chief, Chris Grant, about whether or not staff at Polygon are required to disclose information relating to purchases off assets or investments from publisher related material, but at the time of the publishing of this article Christopher Grant has not responded.

Lego Dimensions is set for release on September 29th for home consoles. You can check out a trailer for the game below.

The Creativity of LEGO Building Meets the Epic Story-Telling of LEGO Videogames for Multi-Dimensional Fun Fan-Favourite Worlds Converge in One Thrilling Adventure — A Dark Knight, a Wizard, and a Master Builder Travelling Down the Yellow Brick Road is Just the Beginning! Warner Bros.

You can check out more info on the game by paying a visit to the real official website.