It seems like the only people who complain about others digging up corruption are those who are either caught in the corruption themselves or are trying to profit from it. Removing corruption from an institution only helps that institution. When you see writers like former games journalist Dave Cook contributing to Vice in a piece called “How Modern Games Coverage Has Reduced Critics to Human Punching Bags” to lament games journalists coming under fire from angry consumers, you realize that many of those whom were once part of the status quo now see the ivory tower from which they were perched, falling and crumbling under the weight of their own hubris.

Cook spends majority of the article fawning over never having been part of the huge in-crowd to have dazzling stories of grandeur to share, or how the party scene wasn’t quite what he expected. Even still, according to Cook, this was all coming to an end anyway, and states that #GamerGate had nothing to do with the current, mud-sliding landscape that is games journalism, writing….

“Believe it or not, things were changing for the better long before Gamergate failed to change anything. The party was over, money in the industry was tighter due to spiralling production costs, and the excess was receding before our eyes. Events were shifting focus back to the games and the people behind them, instead of getting smashed in a swanky Canadian nightclub and having a dance-off with Spanish journalists. True story.”

It’s convenient how he ignores the recent disclosures from major media websites like Gawker and Vox due to e-mail campaigns to the FTC, but I digress.

Nevertheless, before #GamerGate came along, the few times games journalists came under fire for corruption the issues were usually brushed under the rug shortly thereafter. DoritoGate, GerstmannGate and the screed by Rich Stanton about the shady dealings of Future Publishing were a few of the instances where they came and went as fast as the gaming community’s eyes blinked.

However, with #GamerGate, Cook attempts to pull the blinders down over his reader’s eyes but eight months worth of corruption cannot be ignored by the gaming community at large. In fact, most recently, even more conflicts of interest have emerged that someone like Cook conveniently overlooked either in an attempt to save face for the ivory tower of games journalism that bleeds its life-force of corruption out onto the ground like a fish being gutted by a butcher called #GamerGate, or because he’s too scared to do his job.

Just recently, journalist Cara Ellison, a regular contributor to sites like Rock, Paper, Shotgun, PC Gamer and Eurogamer, was discovered to have failed to disclose personal ties with various subjects she wrote about. This is already in addition to the conflicts of interest that were discussed alongside Kotaku writer Nathan Grayson and his $800 financial ties to a developer he was writing about and sleeping with.

On the sub-Reddit Kotaku in Action, user Jasperkr672 posted up images detailing the connection between Ellison and developers she was close friends with while writing about their projects, without disclosure, as discovered by Twitter user @BoogiePopRobin. 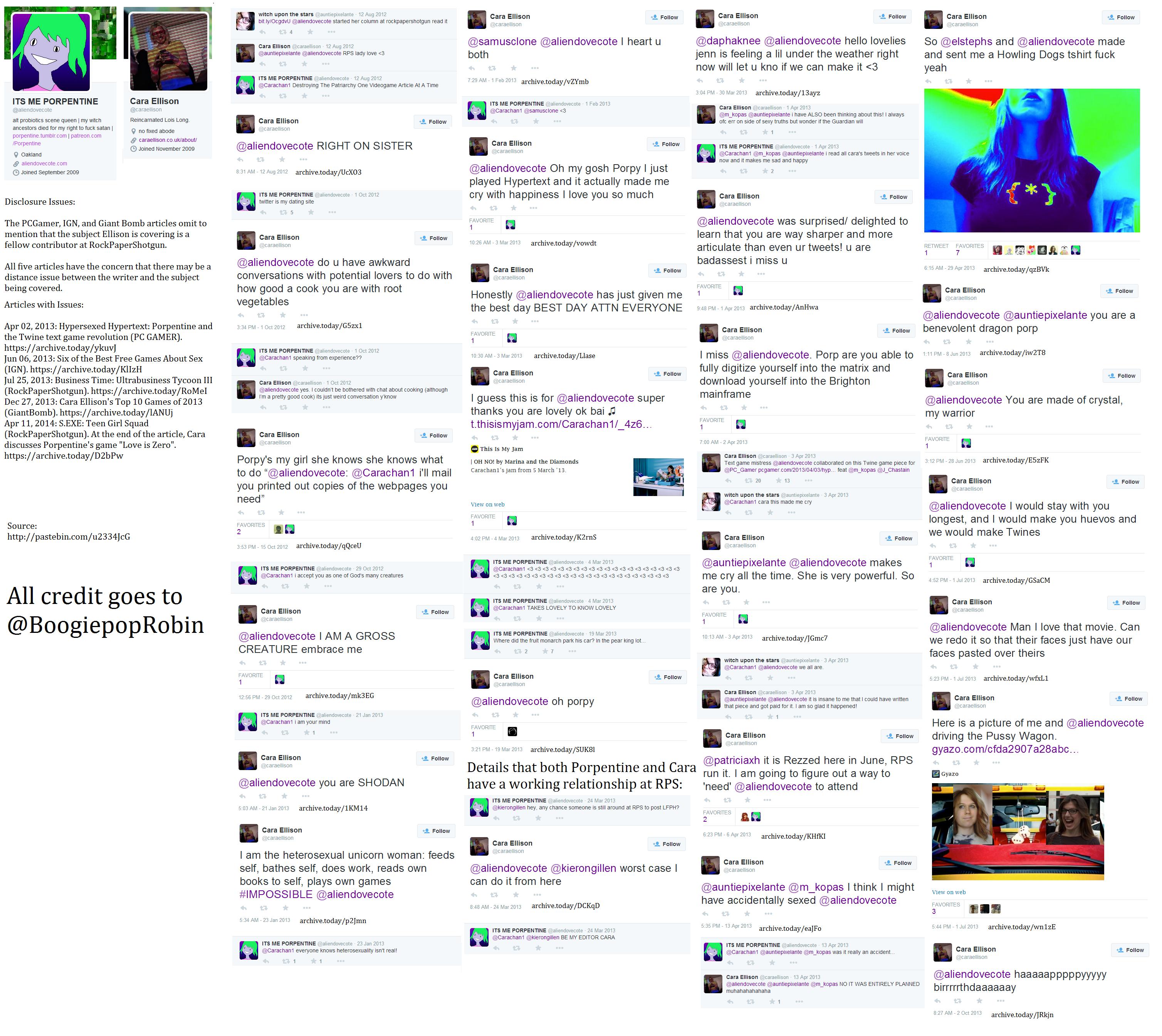 The problem? No disclosure about personal ties. That’s it.

I did reach out to Cara Ellison previously about her ties to Porpentine but never received a response.

Even still, David Cook in the Vice piece mentions that things brightened up for him when he started adding disclosure text to his articles, stating…

“I tweeted a game’s hashtag while drunk at an awards bash, won a PS3 as a result and suddenly became the new Hitler.

“From that point on I declared every press trip, free game or console and gift I ever received in footer of my articles until the day I left the industry, and I refused every single free meal or buffet table offered at events. The heart-warming thing was that readers really responded well to that transparency, and not another word was said. It goes to show the power of a few additional lines of text.”

So why is it that it’s so hard for some journalists to add a few additional lines of text for disclosure purposes?

In fact, had disclosure been acknowledged early on back in August of 2014 there wouldn’t be a need to dig through the social media trash of various journalists to bring up all the dirty laundry that they thought was confined to the communication troughs of Twitter and Facebook. What’s more is that if games journalists weren’t so easy to pushover there wouldn’t be a current stalemate with devs being subjugated to the Metacritic bonus climate. Consumers never asked for this.

Added to this, if Cook was right about #GamerGate not having any effect then journalists wouldn’t be retroactively adding disclosure clauses to their articles, like what Kotaku has recently been doing with writers like Nathan Grayson and Patricia Hernandez, or what Polygon’s Ben Kuchera has done when covering subjects like Zoe Quinn. That’s not to mention all the new ethics policies put into place by major media forces like Defy Media or policies made public by major gaming websites like IGN.

While it’s easy to dismiss #GamerGate as a nothingness in the digital ether of the gaming industry, it was #GamerGate that propelled Allistair Pinsof’s alleged blacklisting to the forefront of gaming discussion, not gaming journalists. In fact, it was games journalists from various publications involved in Pinsof getting booted from his job and blackballed by various media outlets. How can Cook dismiss the fact that various journalists abetted and covered up corruption to that degree? 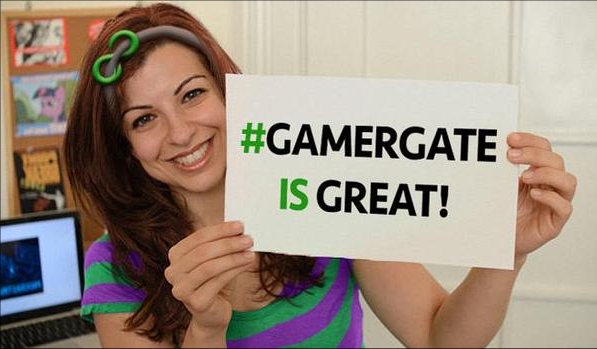 And where was Cook and crew when it was discovered that Reddit mods were actively censoring discussions regarding #GamerGate and any subject matter within the gaming industry involving corruption? Oh right, it turns out that games journalist were colluding with Reddit moderators to censor and stomp out discussions that included keywords such as “GamerGate” and “Corruption”. Because nothing says journalism like narrative spinning and censorship.

There are various games journalists and personalities who still lay the hammer down occasionally, with people like Richard Lewis at the Daily Dot keeping a close eye on corruption involving Riot Games, to TotalBiscuit monitoring disclosure policies on the YouTube front, to Angry Joe sometimes going to bat for consumers when it counts, and even Jim Sterling pointing out faulty practices from time-to-time. And we all know what happened when Allistair Pinsof, the former games journalist, tried pointing out corruption in the games industry. Nevertheless, Pinsof did come back to add some extra weight to Camera Lady’s findings regarding the IGF, IndieCade and the alleged corruption involving IGF chairman Brandon Boyer.

Speaking of the IGF and Brandon Boyer… it appears Cook seems to have completely overlooked that not-so-small piece of information, or he just feels as if it wasn’t worth the effort since #GamerGate seems to be doing a better job at fixing games journalism than games journalist.

In the end, consumers have moved beyond simply speaking with their wallets, they’ve begun to speak with e-mails and Twitter hashtags, and everyone who has partaken or continues to uphold corrupt practices within the gaming media industry will find themselves placed at the mercy of gamers who will not compromise.