Despite the insensitive remarks Tim Schafer made at GDC about the minorities of Not Your Shield, it hasn’t stopped Broken Age Act 2 from recently releasing on PC, as well as the first act becoming available on the PS Vita and PS4. Some walkthroughs have been made available to help gamers get through some of the puzzles and obstacles in Double Fine Studios’ latest point-and-click adventure game.

The game can be completed in just under three hours. There is a playthrough available from Dukem Nukem that plays out at close to seven hours, but there’s a video that clocks in at two hours and 42 minutes from GamerrZOMBIE that helps you blast through each of the game’s puzzle and helps you solve them with ease. You can check out the complete walkthrough below.

A large portion of the early parts of the game is just a whole lot of dialogue. The puzzles are kind of far and few between a lot of talking segments.

However, if you’re new to Broken Age and you just picked up a copy and having a tough time getting into the game on the PS4 or PS Vita, YouTuber Jonlaw98 has four quick videos to catch you up to speed on the game starring Elijah Wood, Jack Black and Masasa Moyo. You can check out the playlist below.

The first game in the series is also pretty short, clocking in at around two hours worth of gameplay. It’s a short ride and obviously sees a lot of the budget having been spent on the voice-acting for the game. The puzzles are surprisingly light for a game that’s supposed to focus on pointing and clicking.

Broken Age was originally Kickstarted a few years back on PC to the tune of several million dollars. It’s a sci-fi, fantasy adventure that follows the lives and impactful events of Shay and Vella. 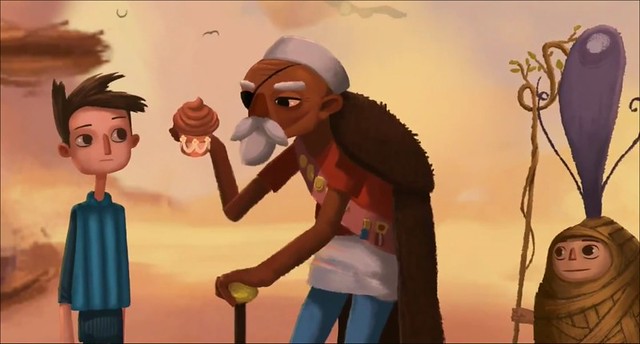 Given Schafer’s recent antics involving his racist/sexist remarks, it’s a little tough to tell how well gamers will adopt the newest act in the Broken Age series, but there are still some gamers looking to get a little help when it comes to the puzzles and the interactive scenarios.

You can learn more about Broken Age by paying a visit to the game’s official website.