The #GamerGate ethics train just keeps rolling on. This time the Indie-Fensible video series from ShortFatOtaku and Camera Lady have pulled into the IGDA’s parking lot… only it contains a lot more than just the IGDA. UBM Tech and their subsidiary, the GDC, also come into the picture as part of an alleged cabal controlling the independent gaming scene.

The video has been making the rounds through the gaming sphere, and you can check it out below if you have 10 minutes to spare.

One of the most damning pieces of evidence in the video was the tweet from Ernest W. Adams, the founder of the International Game Developers Association. The tweet, however, was deleted by Adams, but not before Kotaku in Action picked it up, along with DigiTimes, TechRaptor and the Corruption in Games Journalism Facebook page managed to grab screenshots of the tweet. Remnants of the tweet are left in the form of screenshots and a partial retweet from IndieGameGuys. 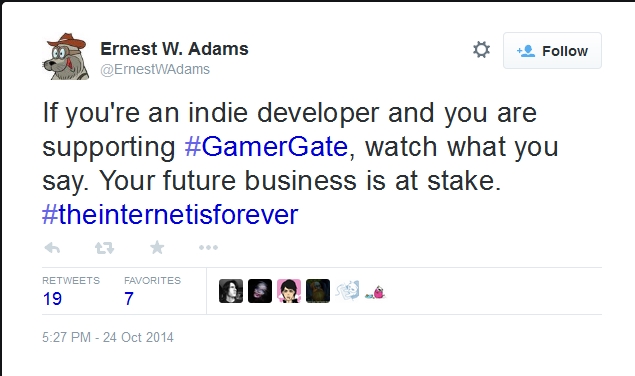 The allegations that the IGDA is being strong-armed by both the GDC and UBM Tech also makes for an interesting discussion. The video ties this all back to the continued allegations and popping up of shady dealings surrounding Brandon Boyer, the IGF chairman. According to Kotaku’s Jason Schreier, Kotaku is interested in investigating the alleged corruption, which resurfaced in an interview series TechRaptor conducted with former games journalist Allistair Pinsof. This clearly means that there’s something there that’s not sitting right with the International Games Festival, especially if Kotaku takes an interest in investigating the claims.

Back in September ShortfatOtaku and Camera Lady unleashed some devastating videos about the IGF that caused a lot of people to wake up and take notice of the festival. Unfortunately, the only thing that came out of it was a brief mention on the IGF’s website denying any impropriety.

Since then some indie devs – as showcased in the video above – have slowly been making peeps and squeaks about some of the things happening behind the scenes with the IGF and IGDA. However, nothing substantial has come out of it and major media publications have refused to acknowledge or investigate, most likely because in the case of the Game Journo Pros, they could be labeled as complicit in the cover-up since IGF chairman Brandon Boyer was on the Game Journo Pros list with many top games and tech journalists and PR agents.

I did, however, reach out to various members of the IGDA as well as those in charge of running the GGAutoblocker. One of the individuals I managed to get in contact with associated with the project was Toby Fee. Fee is a software engineer who is also part of the GitHub group, but when I reached out to him he kept much of the discussion brief when I asked about indie devs being added to the blocklist. According to Fee, indie devs will simply have to go through the process of requesting being whitelisted. This was a similar response given by IGDA founder Ernest W. Adams when I asked about the GGAutoblocker back in November, 2014.

When pressured further about those who have been added to the list without knowing they’ve been added, such as the former IGDA Puerto Rican chairman Roberto Rosario, Fee decided it was time to change the tone of the conversation, stating…

“So William you’re aware I have you blocked on twitter, why would you contact me via another method?

“What reason would you have to think its okay to contact me?”

I decided to reach out to the executive director of the IGDA, Kate Edwards, to ask about some of the allegations that people have been making about the organization and the attitudes toward some of the independent development community, but after a long conversation with Edwards she opted not to go on record. She did, however, extend an invitation to discuss the issues face-to-face so nothing could be misconstrued.

Nevertheless, all of the allegations floating around and many independent developers fearful to speak up has managed to create the exact kind of image that people associate with monopolistic cabals. Unfortunately, no one has come forward to completely dispel the allegations or at least discuss these issues at length from a neutral platform.