One developer has finally seen the light and recognized what the rest of the gaming community have been fighting against for more than seven months under the hashtag called GamerGate. Mark Kern, former World of Warcraft developer, former lead developer on Firefall and founder of Mek Entertainment, stepped up his game on Twitter to call for developers to come forward and stand against the corrupt and biased media that created and perpetuated the animosity in gaming for more than half a year.

Over on Twitter, Kern has a series of tweets calling out VG 24/7 for their hit-piece against him and Polygon’s Ben Kuchera for blocking him after ignoring his pleas to restore peace to an industry that the Game Journo Pros helped destroy.

“I thought Polygon and Ben had a chance of being professional and fair press. Now we know for sure they are the worst cancer in our industry. The collective response of the press to my petition for peace has been accusations, hit pieces, and blocking. Free press? Fair press?

“How can we stand for a gaming press that abandons game developers who only want peace, and trashes all of gaming?

“Fellow developers, creators and game makers…do you want to live in a world where the gaming press threatens you, blocks you, controls you?”

Previously, gaming websites that have established an “Anti-GamerGate” stance subtly threatened developers not to support consumers utilizing the GamerGate hashtag. The idea is that consumers want fair press; they want press outlets that haven’t fallen victim to the venomous snake bite of factually inaccurate click-bait, undisclosed relationships and poorly construed politics that do little else but provoke and polarize readers like a poisonous infection rotting away at the carcass of organized media.

Kern has received some support from notable industry figures such as Ken Levine and Adrian Chmielarz. In fact, Chmielarz recently spoke out against the corrupt media in an interview with TechRaptor where he took the media to task for the one-sided and biased reporting on #GamerGate.

Kern, however, went on to lambaste the Game Journo Pros and crew for furthering a narrative against their own audience, and many developers, saying…

“Thank you Ben and VG247, for showing me that it is absolutely true that you are what they say you are: manipulative, corrupt and blind.

There can be no creative freedom when the press is choosing *which* games and *which* messages you can deliver to your audience. For those developers who think they have found an ally in the press for their type of message and game. How long before the wheel turns?

This is true. This was an issue brought up in the Escapist interviews, where some developers like Danial Vavra and “Oakheart” brought out how the press are definitely pushing an agenda. Those outside the clique make it known that any developer that fails to fall in line with the social agenda get left out, ignored or buried, similar to up-and-coming indie developers who lament their dreams being in the hands of press they largely disagree with.

This also happened to industry investor and veteran Kevin Dent, whose game was promptly dropped from coverage and he himself was blacklisted from being interviewed after Kotaku’s Patrick Klepek called for the Game Journos Pros to stop quoting or reporting on anything he was associated with.

“I urge game developers to open their eyes and see what is happening. Your creative freedom is being policed, your voice is being ignored. What more evidence do you need that the press only wants to hear one side? What more?

Perhaps the women suffrage movement or civil rights movement should just have stuck “to their own press” you know, like black newspapers.

Devs, if you are afraid of speaking up, ask yourselves: who has made you so afraid? Now your enemy is clear.

New wave media websites and YouTubers have been slowly rising through the ranks. They still need support to thwart the current oligarchy that controls and monopolizes the industry.

Kern’s textual Twitter crusade brings up the point about the issues of press and their control over the information that dictates what gets out to the public, the same kind of information that fueled a politically charged and factually inaccurate Wikipedia entry of #GamerGate and a very industry-damaging episode by Law & Order: SVU called “Intimidation Game”…

“And gaming press, remember, one cannot wield the 1st amendment for themselves whilst denying it to others. When 90% of media is owned by six companies, the 1st Amendment now applies to you.”

With a lot of free speech power comes a lot of agenda pushing… or at least, that’s how the current media conglomerates operate. If you don’t adhere to or agree with their agenda, you get blocked. 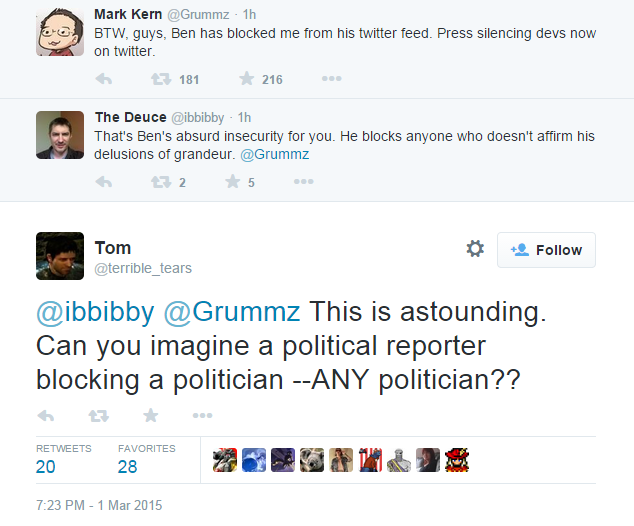 Kern has stepped forward to hopefully open a door where more developers can step forward and speak out against the corruption that #GamerGate has been rooting out for more than half a year. The times are changing and the narrative is breaking.

Will developers choose to stand by gamers or the press?

18 thoughts on “#GamerGate: Mark Kern Calls For Devs To Stand Against Corrupt Media”