Running a blacklist or a means in which people are prohibited from a job based on social, religious or civil factors is discrimination. A lot of people following or retweeting individuals exposing and spreading the news about media corruption under the GamerGate hashtag are being blocked by a GG Autoblocker. Some indie devs feared this could hinder or hurt their potential employment opportunities down the line in the games industry field. Well, the situation took an even more damaging turn when an online jobs resource bot on Twitter began employing the GG Autoblocker, catching some indies in the process.

The GG Autoblocker originally gained fame when it was first endorsed by the IGDA and then stopped being endorsed by the IGDA. A lot of indie devs feared that being on the blocklist could prevent them from being notified or clued into gainful employment opportunities. Well, some of them are dealing with this issue now that a Game Jobs Bot on Twitter has been employing the GG Autoblocker, which blocks anyone following “significant” people utilizing the #GamerGate hashtag. Warning, strong language ahead.

For more context, Bastendorf Games is an independent developer, following the Game Jobs Bot. Since Bastendorf Games obviously followed someone in #GamerGate, they were added to the blocklist, which is quickly turning into an industry blacklist… which is illegal.

Another independent developer also made it known that they were blocked by the Game Jobs Bot, Jennifer Dawe from Dapper Swine Games, the makers of Seedscape. Others also expressed concern over being blocked by the social media jobs resource as well.

I tried getting a bit more data on the Game Jobs Bot and the individual who runs it, unfortunately I’ve been blocked.

Of course, looking through the past history of the Game Jobs Bot through the Twitter search function, you can see that it really is a job bot. It posts new job openings from across the gaming and tech industry, as well as offers useful bits of info about employment opportunities, as indicated by the tweet below.

Sometimes other people will tip off the Game Jobs Bot to post information about job openings in the tech field, such as the one below.

Now anyone on the GG Autoblocker who usually gets updates or attempts to look through the job listings offered by Game Jobs Bot will be blocked from doing so. 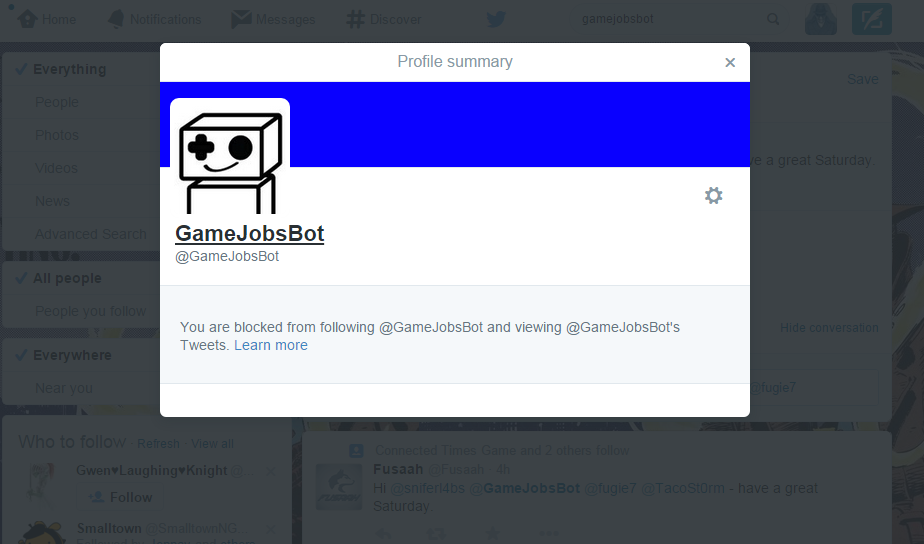 Originally, some developers privately expressed concern about various higher-ups in the games industry utilizing the GG Autoblocker because it effectively creates a blacklist based simply on someone’s interests.

As far as the IGDA previously employing the services of the GG Autoblocker… I asked IGDA lifetime member and veteran game designer Derek Smart about the Autoblocker and the fears that some indies have concerning such a large organization utilizing the Autoblocker. Smart stated…

“Anyone currently blocked on their social media, is just down to individual accounts now. I know this for a fact. I fully understand how an org using this sort of tool, can raise eyebrows & questions. We ALL let them know it.

“Sometimes it’s easier to free the genie than to shove it back into the bottle, you know? So they had to weather that storm. Lessons learned.”

Unfortunately, having the GG Autoblocker in use by various organizations within the gaming industry has already created a fear culture where indie devs and those just starting out are afraid to follow certain individuals within the social media space or speak out using certain hashtags.

[Update: According to a post on Kotaku in Action, it’s stated that the Game Jobs Bot is operated by Jan David Hassel, a game designer at the studio YAGER. I’ve reached out to Hassel and will update the article if he decides to respond.]