Nathan Grayson has been in the news quite a bit over the past couple of months. The guy has been put under a microscope ever since his original conflict of interest with an independent developer initiated the events that led to the start of #GamerGate. Well, a bit more digging has been done and it turns out that Nathan Grayson made a substantial financial contribution to a treatment fund while also covering the subject he donated to… the subject was none other than the IGF chairman, Brandon Boyer.

Ars Technica’s senior gaming editor Kyle Orland put up a post in the Game Journo Pros list on March 6th, 2014 notifying everyone that Boyer was undergoing some serious cancer treatment. He notified the individuals on the list, who immediately responded with articles and financial patronage for Brandon Boyer.

Over on Boyer’s GoFundMe page, he writes about the cancer treatment and the difficult task of asking for help, writing…

“It’s always been extremely hard for me to ask for help from anyone, but outside coming under the patronage of an eccentric billionaire (still working on this, no luck so far), I don’t have much recourse left to climb out from under this, and so I started this campaign to help tell my story and ask for some assistance.”

With Orland posting the message in the Game Journo Pros thread, various journalists helped spread the word and helped donate, with Patrick Klepek donating $30 and writing an article on Giant Bomb about it on March 7th, 2014, along with a few others such as John Walker from Rock, Paper, Shotgun. Klepek doesn’t disclose his donation amount but hints enough at the gesture for funding Boyer.

Enough individuals from across the tech and gaming industry donated to Boyer’s cancer relief efforts to help him out of his financial bind. Including current Kotaku journalist, Nathan Grayson. He donated $100 to the cause, as evidenced in the image below, and spotted by John Galt and IvyClover on Twitter. They listed many of the significant individuals who donated via a pastebin. 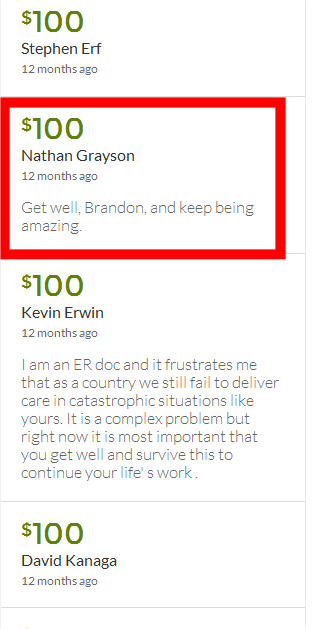 There’s nothing wrong with donating to a cause or to help a friend in need. However, after going through the treatment and getting healthier, Boyer showed appreciation to some of the Game Journo Pros with free invitations to the Horizon event he was hosting. 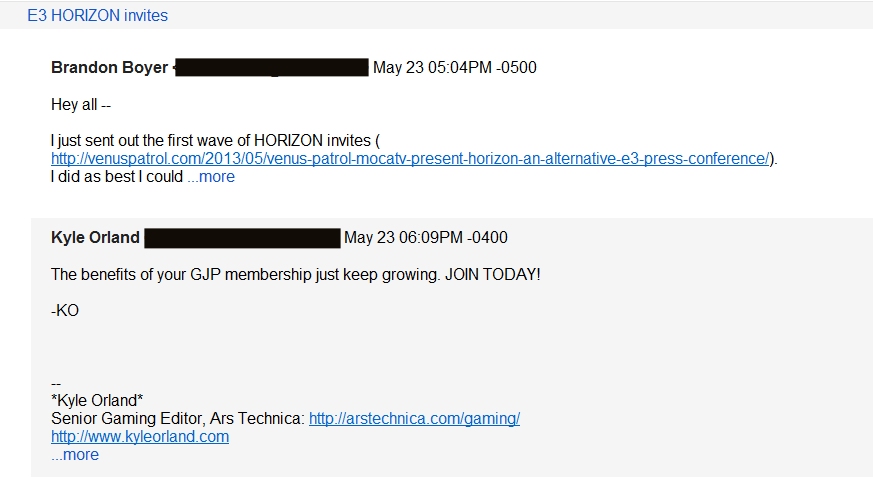 Grayson proceeded to give coverage about Brandon Boyer’s Venus Patrol Horizon event on Rock, Paper, Shotgun on June 12th, 2014. The same event he was privately invited to through the Game Journo Pros. However, he opted not to mention the invitation nor his $100 donation to Boyer during his treatment. It’s a very close-knit group where gifts, favoritism and financial ties are common occurrences. This creates a conflict of interest.

It’s a simple lack of disclosure that has carried through many of the interactions within the Game Journo Pros list. It was that exact measure of chivalry to provide coverage of Depression Quest –for whom Grayson had personal ties to the developer – without disclosure that eventually erupted back in the middle of August, prompting for media to hunker down and for gamers to go on the attack. As noted in the New York University Journalism Handbook for Students…

“Journalists must avoid all financial entanglements (stock ownership, financial transactions, etc.) with the people and companies they cover.”

Even if Grayson decided to fund Boyer’s cancer treatment or receive free tickets to the Horizon event, the least that could be done is disclose it. Then again, when Boyer was a journalist he too was also involved in multiple conflicts of interest. These COIs were logged by a bunch of anonymous information diggers, where Boyer used his connections to post positively about various friends through his Venus Patrol portal and when he was a journalist at Boing Boing. There’s a very long list of each of Boyer’s conflicts of interest, all of which seemingly went unchecked by his superiors.

Nevertheless, Grayson was also involved in other conflicts of interest and lacks of disclosure throughout his tenure at Rock, Paper, Shotgun and Kotaku. However, it appears as if he was never reprimanded for it, at least not as far as it was concerned for the public’s due interest in the subject matter.

In fact, Grayson was often the subject of praise, even in the Game Journo Pros, as evidenced in his move from Rock, Paper, Shotgun to Kotaku. 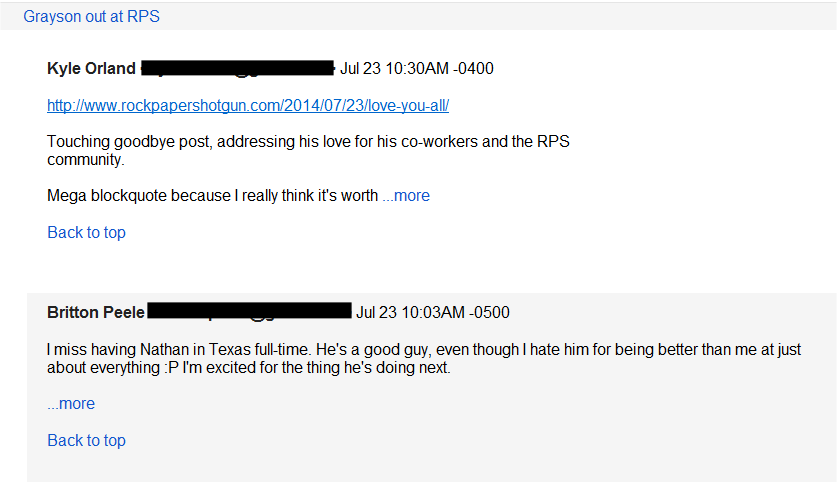 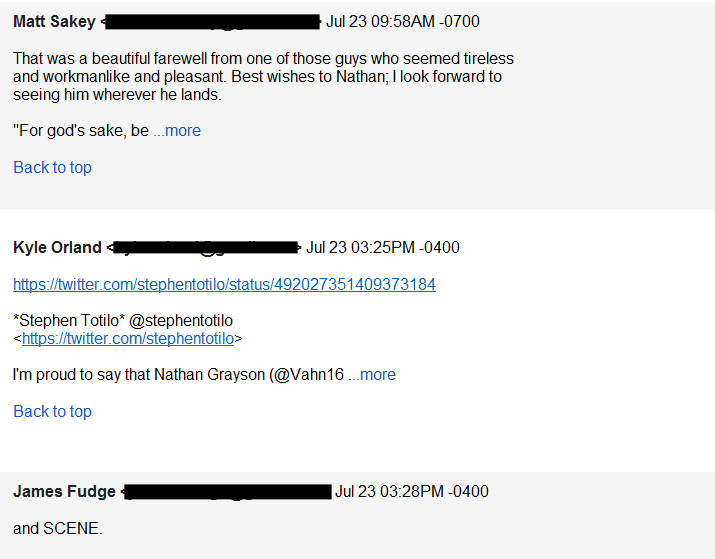 Sadly, this is typical behavior that we’ve seen dug up frequently since #GamerGate started, with only a few websites actually addressing the issue and opting to stray from that kind of behavior. A few of those who heeded the tolls of the bell includes The Escapist, Destructoid and PC Gamer. To the credit of some journalists, the conflicts of interest and corruption have waned over the past couple of months since #GamerGate started.