During a PAX East 2015 demonstration, lead designers on Final Fantasy XV, Wan Hazmer and Prasert Prasertvithyakarn, gave attendees a walkthrough of the game’s combat mechanics as well as the companions joining Noctis in his adventures during Final Fantasy XV: Episode Duscae.

The three companions include Gladiolus Amicitia, the big guy with a cool, hard-hitting fighting style; Ignis Scientia, sporting a really really cool fighting style that looks ninja-ready, but he’s described as a cook that’s mostly there to protect Noctis; and Prompto Argentum, a weak little classmate of Noctis who isn’t very good at combat and which oftentimes lead to him falling over and tripping like a frat boy trying to walk the yellow line after a night full of jagermeisters.

You can check out the full 10 minute video below, courtesy of YouTuber CommunityGame.

One of the few mechanics I was truly curious about was a feature we’ve seen a couple of times before during the tech demos and trade-show trailers; Noctis warping.

The game’s warp techniques allow players to warp to different parts of the environment or to targets. It’s fast, fluent and can easily change the way a battle plays out. Warping costs MP, though. Hence, using weapons and warping takes MP and players have to wait for MP to recover. As players get higher in level you naturally get more MP, allowing for more complex combos and warping tactics. You can warp up to high places to help replenish your MP.

The game sports a parry, roll and counter-attack feature. Players can do a counter-attack by successfully blocking and launching an attack while the enemy is stunned.

There are five weapon slots for Notcis for each battle situation. Players can switch weapons for counters, hard attacks, quick attacks and special attacks, with each weapon having its own animation set and attack power or defensive capabilities. I’ll admit, the weapon settings allow for some really awesome combinations. 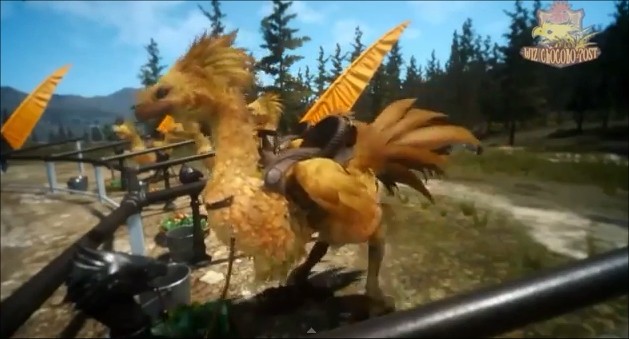 One of the final things that had the crowd excited at PAX East was the revelation that Chocobos will be in the game and it looks like players will be able to ride them.

You can look for the demo of Final Fantasy XV to become available with the launch of Final Fantasy Type-0 HD for the Xbox One and PS4 on March 17th, 2015. For more info feel free to pay a visit to the game’s official website.