#GamerGate has been slandered in the media and defamed by Wikipedia. It’s no surprise given that consumers are going directly after the media outlets that they feel have failed in their job of being ethical and pro-consumer. Caught in the crossfire between the media and gamers are game developers. The devs are just trying to make good games. However, the media’s finger-pointing hasn’t been limited to demonizing their own audience, they’ve also taken to silencing and badgering the artists and creators of interactive entertainment content as well.

One of the developers who knows full well about the demonization of artwork and having said art altered to fit the views of those offended by certain forms of gender depiction, is Larian Studios’ Thierry Van Gyseghem, an animator and artist who worked on the PC RPG Divinity: Original Sin.

Thierry was subject to a lot of criticism following a blog post called “Save The Boob-Plate”, where he spoke out against critics who wanted his artwork for the cover of the game to be less sexually flavored, since the midriff of the female on the box art was exposed. These attacks against artists have been a perpetual occurrence over nearly eight months since #GamerGate started, from attacking an astrophysicists for a shirt he wore, to decrying the cover of a Batman comic for showcasing violence against women. Artists and creators across the entertainment spectrum have been put under strong scrutiny to alter or change things that don’t fit the purview of some puritans.

I managed to get in word with Thierry about these issues as part of a #LetDevsSpeak sub-movement where developers have been speaking up about these divisive issues and sharing their opinions on the matter. This also ties into a Rebuild Initiative to help bridge the gap in communication between the gaming community and the gaming media.

You can check out the interview below. It should be noted that Thierry speaks solely from his point of view and does not attempt to represent the views or opinions of Larian Studios.

Billy: One of the things I was curious about was when the controversy broke out over the boob-plate armor, was it actually Kickstarter backers sending most of the criticisms or was it relegated to the gaming media and pockets of social media sub-communities?

Thierry: The original cover art had been used for nearly a year at that point, we even had a booth on E3 2012, without a complaint. It was a very small vocal minority that complained about the cover design when we went on kickstarter. Because of the kickstarter campaign there were certain gaming media sites that picked up on it and amplified the complains, I think we all know which sites are the most vigilant in their political agenda. I can only assume social media sub-communities will have added to it also.

Billy: For the people who actually bought Divinity: Original Sin, do you know if there was any strong feedback regarding how they felt about the character designs and whether or not they thought they were appropriate, cool, over-dressed or under-dressed? I only ask because it doesn’t seem like character attire is much of a topic in the user review section for Divinity.

Thierry: I think at this point the comments on the in game armours have died out, and I haven’t skimmed all the reviews for it of course. I do recall a series of forum threads discussing both the female armour that still showed some flesh (the fact many of male population did too remained undiscussed and never caused people to be upset) and the fact she’s wearing heels. It has been a topic, but not in such an amount it overshadowed all the good feedback received on the game as whole.

Thierry: Criticism is formed by opinions, and opinions are formed by what we see, hear and read. So yes I do feel that social politics has a hand in the criticism that is thrown at creative freedom because it’s politics that decides what we see, hear and read. It’s remarkable that you can almost pinpoint the critiques to certain parts in the world, since different parts of the world have different politics.

So in that regard, no I don’t think there are that many legitimate critiques on character design as all of it is just pure taste and preference based. You can like something, or you can dislike something. Feel free to walk away if you don’t like it, but don’t harass the creator for it and wave your political flag. 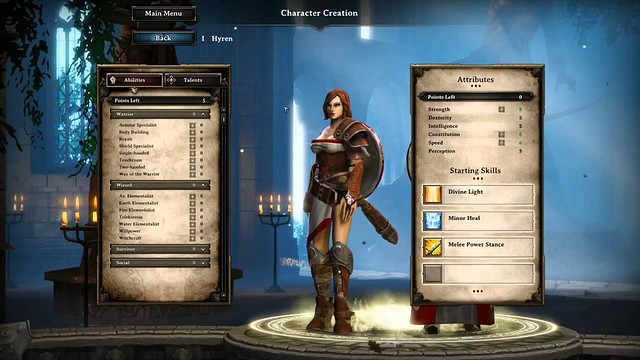 Billy: One of the arguments on a sub-Reddit discussing your post from DeviantArt about “Save the Boob-Plate” claimed that the media pressuring game studios to alter or change artistic choices for characters isn’t censorship. People like Jim Sterling and Jonathan McIntosh have also claimed that it isn’t necessarily censorship to pressure developers to change their artistic vision for characters or story designs. As an artist, how do you deal with these kind of criticisms and how it affects what you do and what you produce?

Thierry: I’ve read comments like that, and I find it remarkable that they dismiss my opinion piece by dissecting my vocabulary and attacking my choice of words. But I will admit that I’ve misused some wording but my intent is still the same.

When you own a pizza place and one day the mob enters your little shack, threatens you by saying if I don’t stop selling pepperoni pizza’s they’ll do anything in their power to make sure you go out of business, then what should we call this? Blackmail? Censorship? Harassment? Extortion? or simply a trade embargo?

In the end the story remains the same, you are forced to rethink your actions and it leaves a shadow hanging over your creations. Every artist deals with criticism differently, I feel that inevitably your next piece will already be affected by it, consciously or unconsciously.

Billy: Some developers have started standing their ground when it comes to artistic merit and character design choices. Other developers like Mark Kern and Adrian Chmielraz have started pushing for more developers to speak up and engage in a two-way conversation using things like the LetDevsSpeak hashtag. How do you feel about developers having a right to reply when it comes to attacks against their work and how do you feel about developers bypassing the typical PR checkpoint to engage directly with their audience?

Thierry: I can only feel very positive about this. I think a two-way conversation with devs is the way out of this mess. Problems are solved when both parties go and sit around the table and talk towards a solution. I truly belief in a human-to-human relationship between devs and fans, and if a company can afford it to bypass a PR checkpoint I believe it’s worth it. But I guess many companies need to rely on PR checkpoints for exposure, and those checkpoints know it.

Billy: There’s a pretty big rift right now between game journalists and their audience. There’s a lot of tension surrounding divisive topics about gender and social politics in gaming. Many sites opt to shutdown or close off comment sections when these topics pop up, while others simply censor dissenting opinions. What do you think gamers and developers can do to help foster healthy communication about controversial subject matter involving gender politics, character designs and social issues without instantly resorting to censorship and threads being locked down?

Thierry: There is indeed a big rift between journalist and their audience. And as far as I see it they have for a large part themselves to thank for it.

But don’t get me wrong, it’s undeniable true that the gaming environment has been a boys club for a long time and I see no reason at all not to invite women to game either. I think this is an admirable goal. Seeing that media is infinite and developers can expand on it infinitely I’m convinced the tactics by which game diversity is achieved are very wrong. I say this because giving women the games they like should not result in taking away or moderating the games the boys like. I think it’s cheap and weak to attack existing franchises, shame them in what they are doing and force through guilt to change their content. Feminism has shown what women can do, that they are strong and no less than men, so why don’t they prove it by coming up with their own franchises? We’ve seen this happen in television and it worked, Sex and the City has proven this.

I don’t have any ready answer on how the industry can solve this, I’m still at a point that I’m trying to balance myself out in this storm and get some clarity on this matter. I do think the industry can build towards a healthy environment again if we all start to respect each other again for our differences and preferences. The consumers are just upset because they getting rocks thrown at them. When articles appear that say for instances gamers are dead or articles that attack gamers in their identity–an identity most of them have assumed decades ago–that just upsets people. I’ll probably do some stereotyping here, but I can imagine that most of the gamers were the ones that got bullied in their childhood, or still are. And now it’s happening again in the world they escape to. I can understand their rage if people keep sending them messages they have no place in this world.

So if we start with respecting each other, we can then start to positive reinforce the games we love and invest in new games we love. That’s how you create diversity! All this without taking a piss on things you don’t agree with.

(Huge, huge thanks to Thierry Van Gyseghem for taking time to answer the questions. Divinity: Original Sin is available right now for PC. You can learn more about the game by paying a visit to the official website or you can check out more of Thierry’s work over on his DeviantArt page)