With EVO fast approaching and some big tournaments already behind us, such as Apex 2015, I’m sure some fanatical smashers following Super Smash Bros. for the Wii U are eager to find out how well various characters work as the biggest FGC tournament of the year draws closer. If you’re curious about some of the advanced tactics, combos and moves for Greninja, well you stopped by the right place.

There are a few really helpful guides and tactics up and available for players to look over in order to perfect their Greninja game. One of the guides comes courtesy of Shiny Saber, who covers the basic combos and moves for Greninja in Super Smash Bros. You can check it out below.

If you weren’t able to watch the video or you just want the basic bullet points without spending five minutes watching the video, the highlights are below.

Greninja’s neutral jab allows him to get in, unleash attacks, and get out. The jab is good for keeping Greninja nimble to dash in or dash out of incoming attacks in between jab combos.

Greninja’s forward-air works like a dive-kick without the aerial delay, which allows users to quickly knock opponents off their feet.

Greninja’s neutral air can be used explicitly as a dive-kick to setup opponents for either a follow-up up-air juggle or as a forward dash attack. 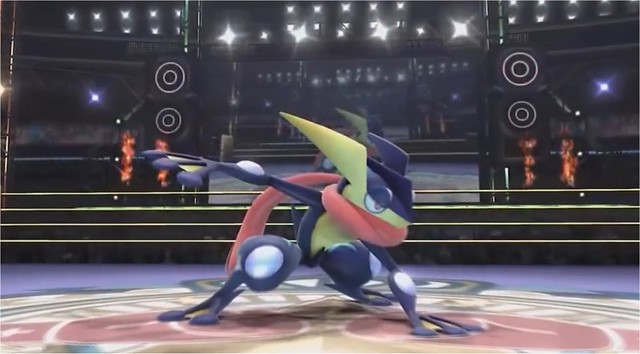 Using Greninja’s neutral air into up-smash can result in an instant-kill move combo if an opponent’s life percentage is high enough.

You can utilize the shadow sneak teleport to get around the arena quickly and setup Greninja for potential back attacks. It can also be used to avoid any proximity attacks by characters, such as Mega Man’s leaf shield. Unfortunately, the shadow on the ground gives away Greninja’s position rather easily and if you aren’t mindful in how you’re using it, it can be easily punishable.

As for the advanced combos, air juggles, initiators and a few ways to finish off opponents, you can check out a combo exhibition below for Greninja, courtesy of YouTuber Muramishi.

You can also see how the slide-dash is also a great initiator for setting up a forward air combo. Utilize the slide-dash into forward air and, if you’re skillful enough, you can try a reverse smash by moving away from your opponent while using the smash skill.

Using a charged water shuriken can stun-lock an opponent briefly to set them up for a dash combo or a follow-up aerial attack.

Speaking of aerial attacks… the neutral air to up-smash attack works well enough to deal out some massive damage to opponents. If you’re really skilled you can go from forward-air to up-air to an aerial up-smash for extended damage. You’ll likely need to execute the forward-air while fairly close to an opponent to avoid risking doing minimal damage at a distance and then being punished for it afterward.

Generally, Greninja is a very fast character with a sort of in-and-out arsenal. He’s somewhat similar to Sonic given that both characters rely on speed and evasion to one-up opponents, but Greninja carries a bit more stability in his play-style.

Super Smash Bros. is available right now for the Wii U and Nintendo 3DS. You can learn more about the game by paying a visit to the official website.