NetherRealm let loose some new trailers and video content for Mortal Kombat X, featuring the different fighting variations and moves for both Kitana and Reptile. The game’s potential microtransactions also managed to get some wind in the sails as a hot topic in the gaming community.

Kitana, Assassin variation focuses on speed and counter-attacks. She has a counter-attack that can counter melee attacks. It’s nice.

You can see the Assassin variation in action with the video below.

You can also check out Kitana’s Mournful variation, which focuses more on long-range projectile attacks. According to NetherRealm, they continually reference that this particular fighting style is mirrored after Jade from Mortal Kombat 9. You can check it out below.

Reptile has some very interesting fighting variations. His Noxious variation is something that I could see being very popular (if not possibly banned) in the FGC. Why? Constant, perpetual chipaway damage. Just standing close to someone takes damage. It’s insane.

There’s also Deceptive and Nimble. The Deceptive is focused on screen-space manipulation with Reptile’s invisibility. Nimble is almost as insane as Noxious given that Reptile speeds up and his opponent slows down. This affects the entire screen. So it enables players to create manual combos. It’s a harder variation to master, but… hot dang Noxious… that’s still so insane.

The final video is full two-match, two-round bout between Kitana and Reptile. You get to see the characters’ combos on display, as well as Reptile’s finisher (spoiler?).

You can check out the seven minute video below.

All right, now that you’re all buttered up with goodness, it’s time to lay down some fan-hurt with a few truth bombs.

So by now, you probably know about the Mortal Kombat X: Kombat Pack on Steam. It’s a $30 pack of DLC. That’s right… you can buy, separately from the main game, a $30 pack of just DLC. It contains extra skins, costumes and characters. As noted on VG 24/7, there are 15 skins, four characters and five packs included.

The Kombact Pack has already managed to land the community tag of “heist”. Check it out in the image below. 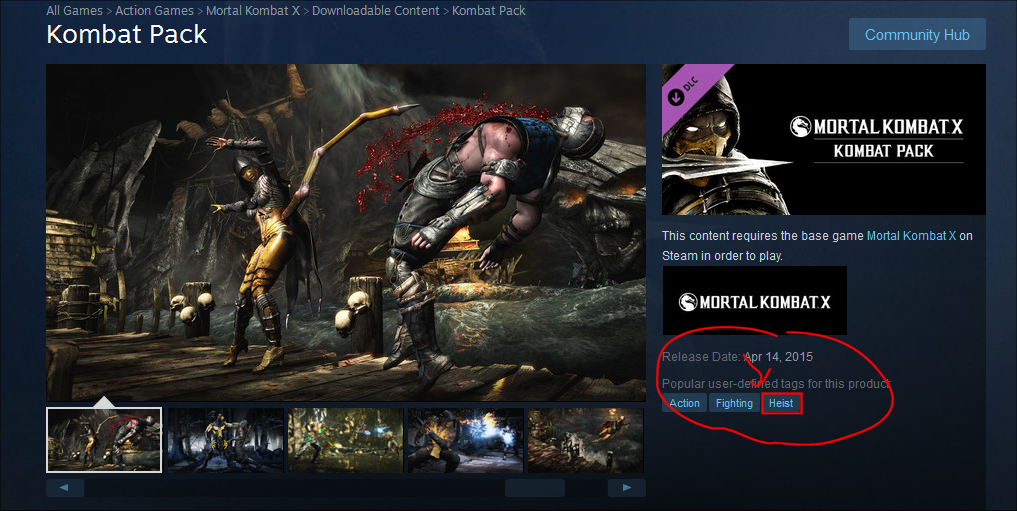 I guess some people think that NetherRealm and Warner Bros., are trying to lift the dollars of diehard fans with a wallet-ravaging, pre-release DLC package.

In addition to this, Main Event TV was recently discussing an article on IGN that notes that there are swirling rumors about Mortal Kombat X potentially having microtransactions. This topic falls into the discussion after the 15 minute mark.

So how would you feel about microtransactions in Mortal Kombat X? If it’s true?

I’m curious how people are taking the DLC Kombat Pack being available for purchase before the game is even out. It’s kind of insane that publishers are now selling unreleased content for unreleased games.