Metacritic… the averages for Evolve have finally come trickling in as major gaming media websites trounce out their opinions and quantify them in the form of numerical values that represent “good” and “bad” on a scale of “buy-worthy” and “skip it for now, Ace”. Well, there’s a huge disparity between what the critics think and what users think about Evolve.

Over on Metacritic (because, why not?) the PS4 version of Evolve currently rates at an 82 by critics, at the time of the writing of this article. This is judged based on 10 reviews from various sites. Three of the scores aren’t so hot, bringing down the average. Unsurprisingly, the three review sites that went below the 80 mark are the sites that aren’t quite at the top of the crop. We have The Sixth Axis with a 70 out of 100, Digital Trends with a 70 out of 100, and EGM going bold and brave with a 65 out of 100.

I think EGM’s score is one of the more honest ones, as they write…

“More often than not, however, you’ll find yourself stuck in another dull and lengthy traipse through the jungle with an unsatisfying and lopsided payoff, made all the worse by a lack of substance or long-term appeal.”

On the user side things are a lot different. There’s a massive polarization with very little middle ground in between. Out of the 210 user ratings, only 83 opted to write reviews. On one side we have 36 positive reviews and on the other, 37 negative. The average user score is only 4.9 out of 10. What did the user reviews have to say?

“I disagree with most of the negative reviews I have read. I think the graphics are up to par, its an original approach to multiplayer gaming, and I also believe the amount of content available from day one is adequate. If you dont want to pay extra money for DLC then dont. You can still play with people who do. I also disagree with the negative reviews arguing that gameplay is unbalanced. I have played with eight human characters and two monsters so far and have won and lost different ways and at different times. However, I do agree with the negative reviews that there is no story line and no campaign. Although I mostly buy video games for their compcompetitive multiplayer, I do enjoy playing campaign as well.”

On the opposite end of the spectrum we have users like Tpluta, who writes…

“If you want a game that looks different but feels like you have played it a million times before pick up Evolve for 60$ at your local retail store. But that is if you want a game that isn’t complete. If you want everything they developed your going to have to shell out 120$ total for the game and a season pass full of DLC they already announced, before the launch of the game I might add. Please do not buy into the hype. Your money is better spent on almost anything else. I would rather give 120$ to a humble bundle than buy this game again.”

I can understand the statement about the DLC since there’s so much of it and it’s very expensive. What’s more is that there was already a road map for all the well before the game launched, giving players an idea of what was to come, while promoting a $60 product that looked very bare-bones from the outset.

One user, rickyrb, takes a very moderate approach that I think echoes the sentiments of a lot of players out there, writing…

“This are just one example, Destiny in my eyes would be the exact same as Evolve is right now, lacking content, selling DLC content that already exists on the Disk, just to name a few.

Over on the Xbox One side of the Metacritic table, it’s the same story, with TomA writing…

“The reason for the low score is that this is really a multiplayer only game and in it’s current state, it’s pretty much unplayable in the UK. I have been into a few matches when it works and they are decent enough. But not sure I’d pay full price for it.” 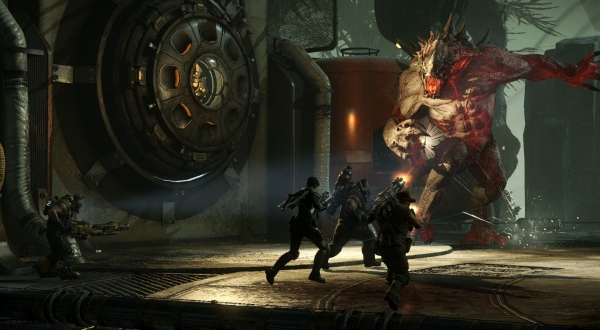 SWERY_51 seems to share a similar idea about the game as well, writing…

“It’s fun few hours, but honestly, i can’t recommend it at this price. The content is kinda poor and the list of DLCs already available give me an headache. It should have been a F2P, that’s a major disappointment.”

On the professional critics’ side, the Xbox One scores are almost the same as the PS4, with only three outlets opting to go below the 70 mark. Xbox Achievements and Shacknews give the game a 70, while the highly reputable Metro GameCentral dipped down to 60 out of 100. The Xbox One critics’ average sits at 77 at the moment. The user average? 5.2.

The PC side shows a slightly higher disparity between the home consoles, with most professional outlets tagging Evolve with an 80 out of 100, and only Jim Sterling from the Jimquisition ballsing up to give the game a 60 out of 100.

The user ratings are far less fair, with more than 382 mostly angry gamers chiming in to rate the game. There’s 152 user reviews with an overwhelming amount of them being negative… try 85 on for size. Only 57 positive reviews and a startling 11 mixed reviews.

The polarization between critics and gamers couldn’t be more apparent.

“Unlike the likes of Left 4 Dead 2 which was fast paced, frantic, fun, humorous and filled with additional material; Evolve is just another soulless modern FPS with a linear design and weak gameplay. The absence of modes and content within the base game is a major problem and a huge insult in the knowledge that much of it is being withheld to be sold down the line as DLC.”

Things eventually veer off and away from the game and toward the critics themselves; who critiques the critics? Consumers do, that’s who.

“It is just appaling to see so many VG Website bestow excellent review on this game. It’s maybe me getting older but i feel like the trend is getting worst every year. Shouldn’t those guy be on our side, providing us helpfull guidelines to handpick the games best suited for our taste, casting our attention on deserving developpers and warning us about blatant cashgrabbing scams dressed as video games?”

Lyanstrait gave the game a 2 out of 10. An upgrade out of the typical “non-participatory” 0 out of 10 score.

But yeah… shouldn’t gaming websites be on the side of gamers instead of attacking their own audience? Shouldn’t they be standing up for consumer rights instead of ruffling feathers in a consumer revolt coalescing under the Twitter hashtag Gamergate? Well, that’s if we weren’t living in bizarro world. Sadly, we’re in bizarro world and the critics hate their own audience. It’s also why we continue to see such a disparate divide between gamers and those who review games.

In addition to this, a bunch of the reviewers likely got free copies of the game, and they’ll likely get free DLC add-ons as well, so it’s a little hard for them to be as judgmental as consumers when they get freebies, get to tip their trilbies in San Francisco’s hilly ivory towers, and preach down platitudes about moral social justice while exercising bigotry, racism and sexism. That’s the games media for you.

My own thoughts of Evolve mostly align with the negative and middle-of-the-road user reviews. I just can’t get into the game, and there’s just not enough content to justify $60.

I suspect that as more reviews pile in for Evolve and more users start sharing their own opinions, expect the critics’ and users’ review scores to further bifurcate into polar opposite directions.

Nevertheless, Evolve is available right now, and if negative reviews steeped in common sense from people who have paid for the game hasn’t detoured you from plopping down $60 for the title, then feel free to pick up a digital or physical copy for the Xbox One, PS4 or PC from participating e-tailers and retailers.