Controversy Behind The Untold History Of Japanese Game Developers – Part 2

On October 6th, 2013, after working out a few more bookings and attempting to sort out the situation involving the interpreter that John felt did not provide an adequate job in previous interview bookings, he wrote the following message after having a phone call with Hanako…. 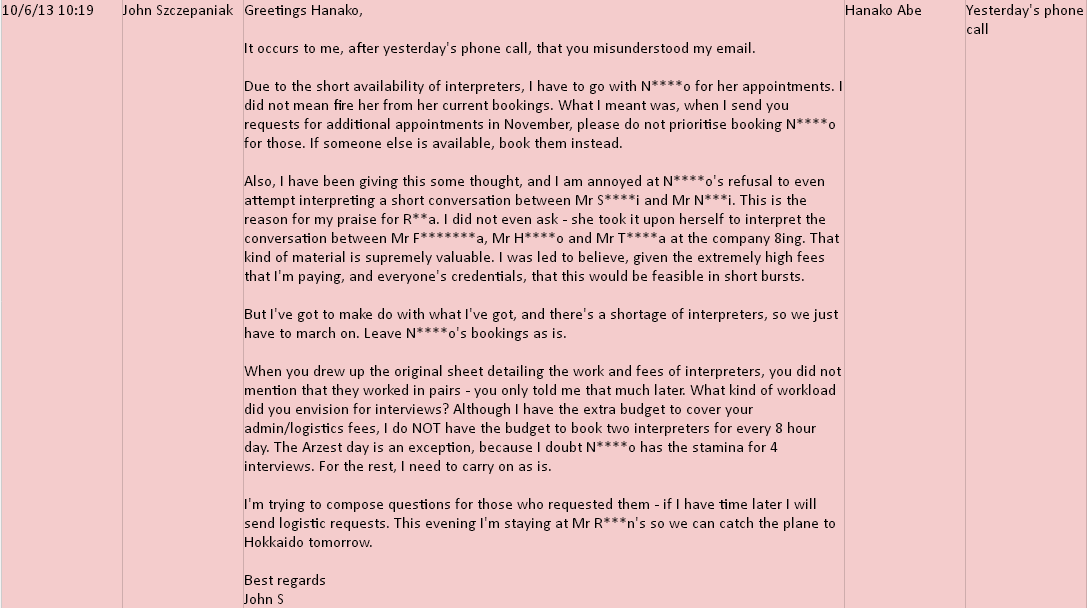 By October 9th, 2013, the partnership was finished and Hanako left the project.

John had reached out and requested to work with another freelance interpretation team, writing…

“It’s a long story, but I’m not working with Hanako anymore.

“Are you available for freelance interpretation on a series of dates through October and November?”

John eventually switched over to another team where he states he had no problems fulfilling the bookings or interpretations.

According to Josh Weatherford, from the localization team that worked with John, he mentioned on Twitter that…

“Not gonna say much as I do know some of the background about this but don’t wanna be dragged in…. but we worked with the dude and had absolutely zero problems. From what I heard he was a pleasure to work with.”

In a follow-up e-mail, Weatherford further mentioned that…

“I didn’t work with [John] directly very much, but it was a very simple matter of him having problems with his previous interpreter during his trip, and got in touch with us. I had previously contacted him during his Kickstarter offering our help, but he got back saying he already had something set up. So he knew about us because of that.

“After that, I just set him up with our localization director and he arranged for some of our staff to travel to Tokyo and help him out.”

John also made an update on the Kickstarter page notifying backers about the situation so that they would know how the money would be spent and what was happening. According to John, managing money and the responsibility of managing the money of others is very important, as he stated…

“I do not mess around with money, and I do not like it when people mess me around with money. I always pay what is due. With the Kickstarter books, when people in Brazil did not receive their copies, I refunded them all. Others gave the wrong address and the book went missing, so I sent replacements free of charge.”

He made a post on November 21st, 2013 detailing what happened between him, the interpreter, Agness and Hanako called “Dealing with unethical people”. John wrote in the post…

“For the record: two of the other elite interpreters were excellent, in addition to the junior, who I should have stuck with from the start. This so called “junior interpreter” was not part of Hanako’s private cabal of friends, though they knew of each other professionally, she was an outside person I brought on board and who Hanako accepted only reluctantly. She was one of the best interpreters I had, skilled and with plenty of stamina.”

[…] “My complaint is not the money or the fees, which I willingly paid, but the failure to honour agreements. As for Hanako’s choosing to leave the project, it’s the best thing that happened to me. Working with her on a daily basis was excruciatingly painful, and she went out of her way to psychologically demolish me every time we spoke.

“After she left I went back to several of the original interpretation offers I was given, and found them quite excellent – and without lamenting my inadequacies compared to the New York Times, NASA, the Guam Government, and various Fortune 500 companies.”

John states that the fluctuating prices on the bookings and some of the poor interpretations were the final straw for him.

Things also took a turn when Hanako had requested John to sign an NDA before stepping away from the project. The NDA requested that John not bring up the health conditions of the interpreter or the quality in which the interpreters were able to carry out their job. You can view the NDA right here.

John refused to sign the NDA even after having talks with Agness about the situation. Things rapidly dissolved between them; John was disappointed with the business arrangements and Agness was set to protect her sister. 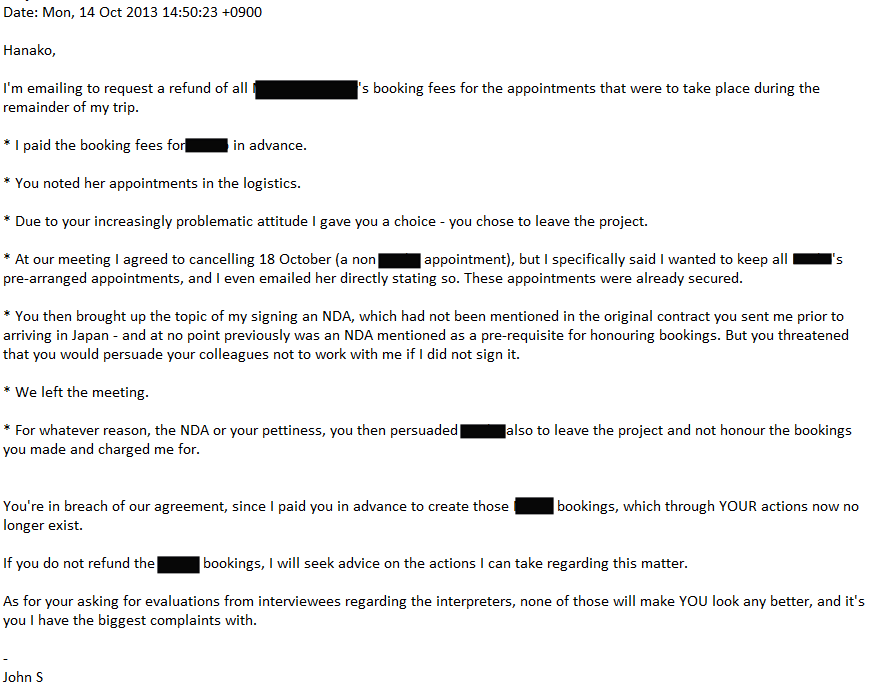 In March of 2014, John wrote a message with the subject line “walk away”, mentioning to all the involved parties…

“You, your sister, and your respective spouses seem to have the misconception that I want to taint my book by mentioning you. It was and still is my intention to omit your existence.

“I washed my hands of this matter on January 17th. You then waited two months before goading me with your harassment campaign.”

The letter goes on to state that if things keep up, everyone will be tarnished in the process.

I asked what Hanako thought about all of this, and she stated that…

“Mr. Szczepaniak was one of dozens of clients I worked with in 2013. Nothing that happened during our business relationship explains the smear campaign he has been conducting. At first I could scarcely believe he was doing this intentionally, but the way he carefully censored my letter proved to me beyond doubt that he understands he is lying. Before he started this, I just thought of him as a nice young man who was a little overwhelmed. I felt somewhat protective of him. Every time he went to an interview, he asked me to tell him what trains to take and which station to transfer at. The first time we met in person, my first thought was to find him an English-speaking hospital because he had bruised his arm badly in a fall. He was a quirky person. Even when he was becoming very nervous and irritable, l felt protective of him. I felt sad for him too, because from what he told me, he seemed to have no one close to him who was happy for his big chance.

“He should stop delaying the trial and own up to his mistake.”

John mentioned on various occasions that Agness took to Facebook and Twitter to defame him, after he made the initial update on the Kickstarter page about how he felt Hanako was not suited for the task. Additionally, John claims attacks against his profession, his professional ability and his character were carried out in various forms from the Kaku family, as indicated in a rather scathing letter from Agness that you can read in its entirety here.

It was also mentioned that Hanako had contacted interviewees following her departure from the project, as noted by Agness on Twitter, with John stating…

“It did not diminish the fact she was attempting to inject poison directly into the heart of the project. This is what upsets me. She will do something deliberate like that, the purpose of which is only to harm someone, and then she says something like: ‘I felt sorry and protective of him, because no one was happy for him.’ Her comment is wildly opposite to the act of using private information to contact interviewees and badmouth me.”

Following the Twitter and Facebook escapades, Agness’ husband Peter Duimstra stepped in to speak with John, but he couldn’t sway him, as evidenced in the e-mail exchanges on the Versus.JS blog.

Things escalated when the libel case came into play by Agness, and eventually the issue spread amongst the backers of The Untold History of Japanese Game Developers… so much so that a topic was created in the IGDA’s localization SIG mailing list where Agness and Hanako were brought up. After Agness posted a message explaining her side of the story, an IGDA moderator stepped in to shutdown the conversation, mentioning that…

“I [don’t] think the IGDA nor the Loc SIG are in any position to comment on such issues, especially when they revolve around unresolved court cases.

“Adding the fact that the matter doesn’t appear really related to localization, I think most of us would prefer if this matter wasn’t brought up again. Thank you for your understanding”

According to John, Agness and Peter sent a message to backers via LinkedIn as to include them in the libel case, exposing the backers’ names and companies they work for. A copy of the message can be viewed right here.

I asked Agness what the reason was for reaching out to the backers, and it was stated…

“You’re giving your position away there, William. The reasons? Transparency & good legal practice. For example, did you know, repeating libel is still actionable libel in many places? By lying about us, Jon put his backers in legal peril.”

Additionally, Kickstarter backers mentioned to John about receiving the letters after posting on the Kickstarter update here and here. 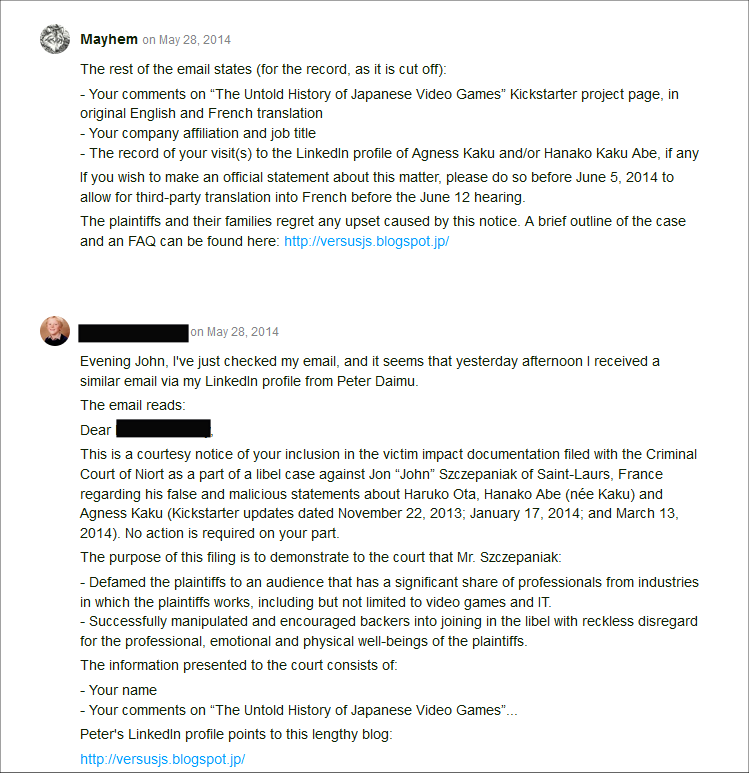 Needless to say, backers weren’t pleased being dragged into a situation for simply donating to a crowd-funding project.

Agness and her husband Peter Duimstra also criticized John for his approach to the project, as well as his handling of the interviews and interpreters, writing on the Versus.JS blog, saying…

“Listening to others, respecting their professional interfaces, and honouring his appointments with them — John failed repeatedly in each of these capacities. Such failures would be considered acute in any professional setting. In Japan, they are inexcusable.

“Perhaps John would have known this if he could speak Japanese, as he claimed on his project page. Certainly basic Japanese proficiency would have helped John manage more of his project on his own, rather than overburden his interpreter-coordinator.”

They also mentioned that one of the biggest problems that impeded the interpreters was John not submitting all the questions for each interview beforehand, writing…

“John’s failures to pre-submit questions to interviewees and interpreters showed a peculiar disregard for both local custom and professional obligation. In Japan, interviewees expect to have a chance to refresh their memories and organise their thoughts prior to interviews. Similarly, professional interpreters expect to be able to deepen their topical knowledge and vocabulary prior to interpreting sessions. By failing to pre-submit questions, John denied other people the means to perform well…and then blamed them for the results.”

According to John, pre-submitting the questions wasn’t the problem, as he mentioned that some interpreters performed better than others without pre-submitted questions. He also stated that…

This escalated from here, as attempts to get the media involved (or rather, prevent the media from getting involved) were enacted, and a soft media blackout took place.