Tomasz Waclawek is working on an upcoming side-scrolling stealth title called Ronin. The game has been in the works for quite some time, first making an appearance in the news scene last summer. Recently, Devolver Digital dropped a trailer for Ronin and it looks pretty killer.

The game features a heroine out for revenge against a handful of bad guys; she utilizes ninja tactics to take down their fortifications. I don’t quite understand the name because a ronin would be a disgraced samurai without a retainer, but in this case the title character seems to be a ninja – from the wall sliding to the stealth to the quick-kill attacks. I’m a little befuddled.

Anyway, the game looks cool despite what some might consider to be a misnomer for the title. You can check out one of the more recent gameplay trailers below.

As mentioned in the official description of the game…

“Ronin is stylish a turn-based action platformer following the exploits of a vengeful heroine determined to strike down five prominent figures of a powerful corporation. Move with precision by meticulously planning out each silent step, soaring leap, and devastating swing of your blade from the shadows as you seek your revenge.”

Funnily enough, the comment section is ripe with people yelling and screaming about the game being a ninja-esque rip-off of Tom Francis’ Gunpoint.

There are definitely similarities, but Gunpoint was a very, very different kind of game with a deep layer of strategy focused around cyberpunk-style hacking as opposed to hack-and-slash, turn-based melee combat.

The game is scheduled to arrive on Steam at some point, but if you’re really itching to get in some game time, you can check out a 5mb demo that’s available on the teedoubleu website. 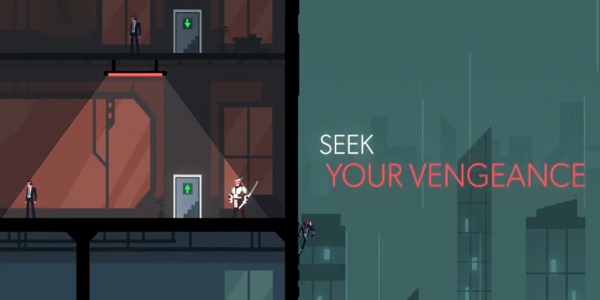 I haven’t had time to check it out myself, but I’m liking the trailer and I’m loving what the game has going for it as far as the turn-based combat goes.

One thing that boggles my mind, though, is how there’s no way anyone would know that the protagonist is a female if not for the description. I wonder if the developer was purposefully going for a Samus-effect where she’s covered from head-to-toe and purposefully depicted in a sort of androgynous way in order to deflect criticism? Of course, there are still the folks out there who would rail and yell about her being a “dude with boobs”, so it’s not like you can win either way with some of those people.

You can check out a few more screenshots and an extended description of the game by paying a visit to the Steam page.