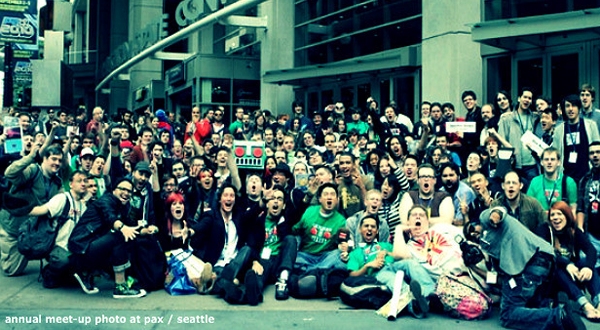 Lots of parting faces from regular outlets this month. Whether people want to attribute any of this to the controversial happenings of #GamerGate or just the natural order of progression is entirely up in the air and already becoming part of the discussion. Nevertheless, there have been some pretty huge shakeups in the gaming industry… on the press side.

First up, Hamza Aziz, the former CEO of Destructoid is parting ways with the company. He wrote about it over on Destructoid. He explains that it’s time for him to move on and pursue other avenues in life, writing…

“My leaving is nothing against Destructoid. It's just personally, I feel it's time I see what else is out there. I'm dying. Like, dying in a "I'm human" sense, not because I have cancer or anything ... well I don't think I have cancer. Oh god this is a terrible joke. Point is, I'm mortal and I want to make the most of my existence with this thing called life.“

Discussions within some gaming circles have hinted at the troubled environment at Destructoid being cause for concern following the corruption allegations that surfaced in a multi–part exposé. Shortly after the publishing of the series of articles, then editor-in-chief Dale North had opted to resign. No one from Destructoid has gone on record about the details behind Dale’s resignation. A similar event unfolded with Patrick Klepek leaving Giant Bomb, but in the same case there were no quotes or anyone willing to go on record about the details behind his jump from Giant Bomb to Kotaku.

Even though Hamza Aziz was on the Game Journo Pros list, which has been the cause for much controversy since being unveiled on Breitbart back in September, he wasn’t implicated in any direct wrongdoing like some of the other members. Still, according to Hamza Aziz, all the presumptions relating to anything other than his own willingness to leave are just that… presumptions. Aziz wrote in the comment section…

“I should add nothing bad or anything is going on because YOU KNOW PEOPLE WILL PRESUME. Just coincidence with Max and I leaving around the same time. I honestly could have stayed longer riding it all out, but I love this place too much to do that. Plus, there's some more new folks including some old returning faces you all should keep a look out for.”

The “Max” he’s referring to is Max Scoville, who recently joined Destructoid after Rev3Games shutdown.However, Scoville recently parted ways from Destructoid at the end of 2014. Scoville recently joined IGN, conveniently just as journalists and editors Greg Miller, Colin Moriarty, Tim Gettys and Nick Scarpino parted ways from the company, as reported by Heavy.com. Don’t worry, Miller and crew have headed to Patreon and will still occasionally have content appear on IGN periodically.

According to Scoville, when I asked about him possibly contributing anymore to Destructoid, he simply stated…

“I have another full-time gig lined up, so I'm not going to be working for Destructoid anymore.”

Most gamers who have been hammering press for ethics reform – something Destructoid actually did do in the early days of #GamerGate – also recognize that at this juncture any actual changes happening behind the scenes at most outlets will never be attributed to having any relation to the consumer revolt in the games or mainstream press. Very similar to how none of the mainstream or games media is reporting about the FTC enforcing Gawker and their subsidiaries to update their disclosure policies regarding affiliate links and native advertising.

However, one case that really does have nothing to do with #GamerGate is Computer and Videogames shutting down. That’s right, CVG – the popular Future Publishing gaming outlet – shutdown near the end of December.

All throughout 2014 there were constant reports about Future aiming to shutter the doors of CVG and focus more on native advertising, lists and commerce journalism. The eventual closure of CVG was highlighted across multiple articles from sites like MCVUK.

This news was taken with a great sense of morbid sadness from the gaming community given the respect and reliability that CVG had earned from the community over the years; even extending as far back as the outlet’s venerable run as a printed magazine.

The future of the video game journalism landscape looks ripe for the taking. New media has an opportunity to swoop in and pick up a community for whom there is little respect or expectancy from the old guard. The question is: can new media adequately fill the shoes that others are leaving behind?