It looks like the numerical third game in the highly lauded Borderlands series is gearing up for production. CVG caught tweets indicating that Gearbox Software’s president, Randy Pitchford, is advertising open positions at the development studio via his Twitter account.

You can check out the tweets that Pitchford sent out below. 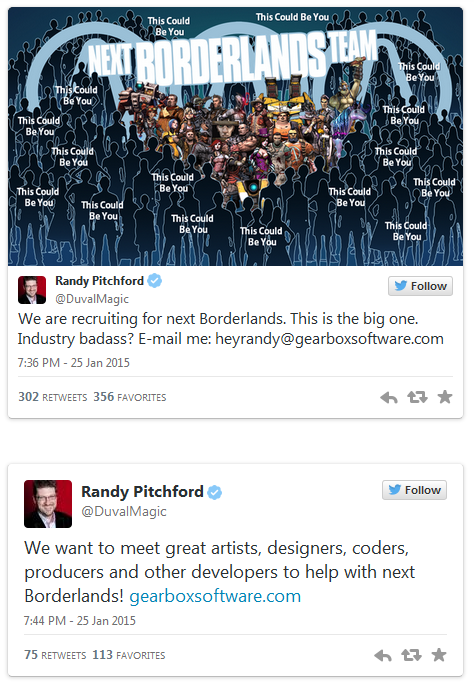 The article also points to Pitchford’s comments from a recent panel discussion that happened over the weekend at PAX South, where IGN quoted the Gearbox President saying…

It was rumored back before that certain team members of the Gearbox staff were already prepping to write a story draft for Borderlands 3 shortly after Borderlands 2 launched, but they also made it known that “no work” had started on the third game.

I’m a bit torn on this because I do indeed like Borderlands… a lot. However, Pitchford and crew were ripe and willing to throw gamers under the bus to protect cronyism and collusion in the games industry arena when Anthony Burch made his connections known with Destructoid and the general attitude was basically: “So what?”

It’s hard for me to ignore that, especially following on the heels of the way Gearbox handled the Aliens: Colonial Marines fiasco, and how the press – once again – was willing to throw consumers under the bus, blaming them for daring to pre-order Gearbox Software’s game.

At this juncture, I’ll stick to surveying from the outside looking in and keep any future Gearbox titles on my “Must Buy Used” list.