The good folks at Kotaku in Action and 8chan’s #GamerGate board have uncovered attempts by hacking groups to raid #GamerGate social hubs and the Twitter space by using botnets.

For the uninitiated, doxxing is when you post someone’s personal information in a public place; their home address, their photo, their social security information, their bank records, or even where their kids go to school.

Just recently, a prominent face of #GamerGate — and the individual who wrote a detailed piece on Buzzfeed discussing the issues surrounding the scandal — @Lizzyf620, was doxxed and had her information exposed to the public. Her doxxing was covered over on Jenn of Hardwire’s site that documents and archives harassment and threats that consumers fighting for ethics receive while utilizing the GamerGate hashtag.

The KiA thread actually managed to capture screenshots from the site that hosts the doxxing info, showcasing that Lizzyf620 was a victim of someone who wanted her doxxed, as evidenced in the screen captures below. 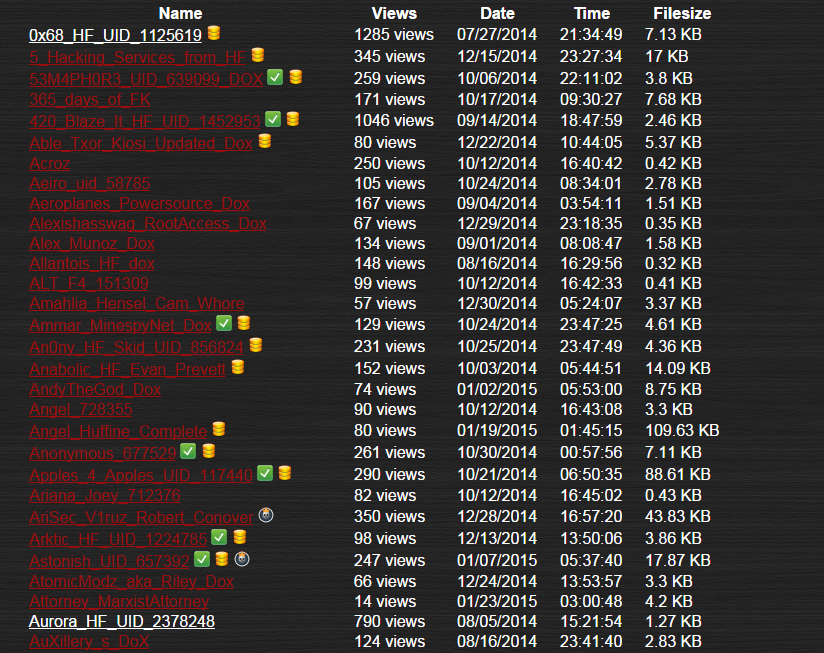 Logs were also captured from the botnet and posted before it was taken down. You can check out the logs here. [Correction: Meowsticgeosnya clarifies that… “Actually, most of those logs are from the hacked account being used by the botnet’s owner, not from the botnet itself.”]

As you can see, there are a bunch of duplicate messages being sent to various individuals under the GamerGate hashtag, including Lizzyf620’s doxxing information. The info has been redacted in the logs available through the pastie.org link. You can also see that one of the bots from the logs were screen-capped sending Brianna Wu a threat. 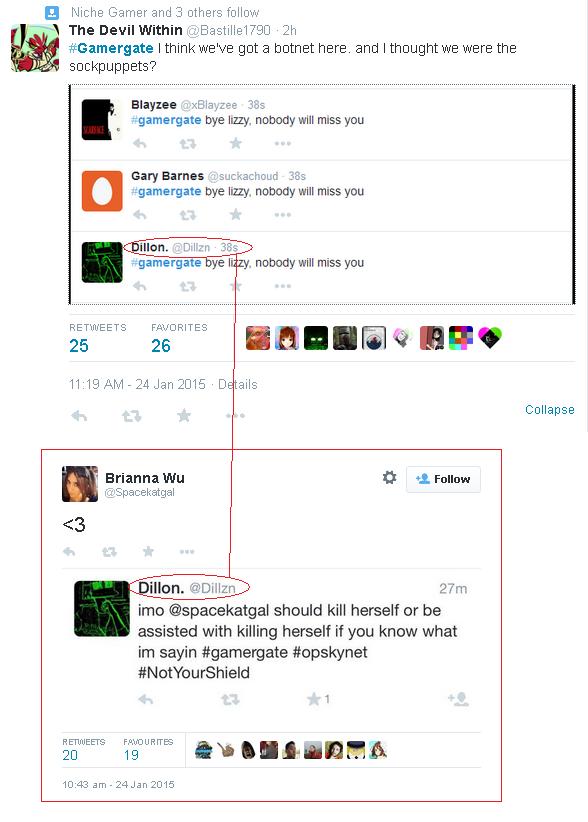 The actual website url that hosts the dox was quickly removed from the 8chan post to ensure no one ended up there. The bot also attributes association to the same group who claimed responsibility for taking down Xbox Live and PSN over the Christmas holiday, as showcased in the tweet below.

One of the mods at KiA also pointed to posts in the Reddit thread that indicates that the owner of the site hosting doxxing information responded on Reddit to defend his site. Under the username PerniciousSky, the alleged owner of the doxxing site stated…

“First of all, this site is not ‘french’. Nor is it a ‘blackhat’ site, it’s purely a place for people to post doxes (Which is not illegal).

“As for those of you who are concerned about the safety of the site, I’m the owner, and I would never attempt to compromise my users. There is no malicious software on my site that could harm you – period.

“As for the dox being posted, it’s completely un-related to me, as you can see from the page index, anybody can post doxes here. I don’t know who posted it as my website does not keep logs. (once again, to protect users anonymity).”

The doxxing site actually takes you through a Cloudflare redirect, which caused a lot of Reddit users to fear that perhaps it was a malware site. However, the site itself poses under a domain handle that somewhat mimics the FBI. Of course, the actual content of the site is anything but related to the Federal Bureau of Investigation.

“Please don’t try to slander me or my website before learning all the facts. This isn’t my battle, you should keep it that way.”

Someone from the infamous DDoS and cyber-terrorist organization posted a tweet claiming responsibility for hosting the website, but it’s not made clear if this is the same individual who also posted on Reddit.

[Update: Meowsticgoesnya has clarified that the owner of the dox site and the member of the DDoS group in the photo below are two different people.]

I ran doxbin for nearly a year & managed Lizard Squad at the same time, now dox me @briankrebs pic.twitter.com/BNjcDrPhlx

This is also the second time that #GamerGate was responsible for finding and exposing a very prominent and malignant element working against the better interests of #GamerGate. The first time  was when the #GamerGate harassment patrol found and reported Anita Sarkeesian’s harasser, a Brazilian clickbait journalist.