You know what’s sad? When people know that the gatekeepers that inform consumers about the products in an $86 billion dollar industry are corrupt. What’s even more sad is when developers and gamer alike recognize that the corruption that’s seeded deep in the very veins of the journalists that control the news, preview and review ring of gaming are the status quo.

Well, one developer decided to speak up about some of the issues in the industry, from Metacritic scores to the outrage surrounding #GamerGate and the consumers that stand behind the hashtag.

Since the developer is still actively part of the industry, they opted not to reveal their identity to the public. I was sent over two pieces of trade industry identification and a history of the developer’s positions held at various studios while working on a few big name franchises. With the dev’s permission, you can check out the GamesCom 2013 badge below. 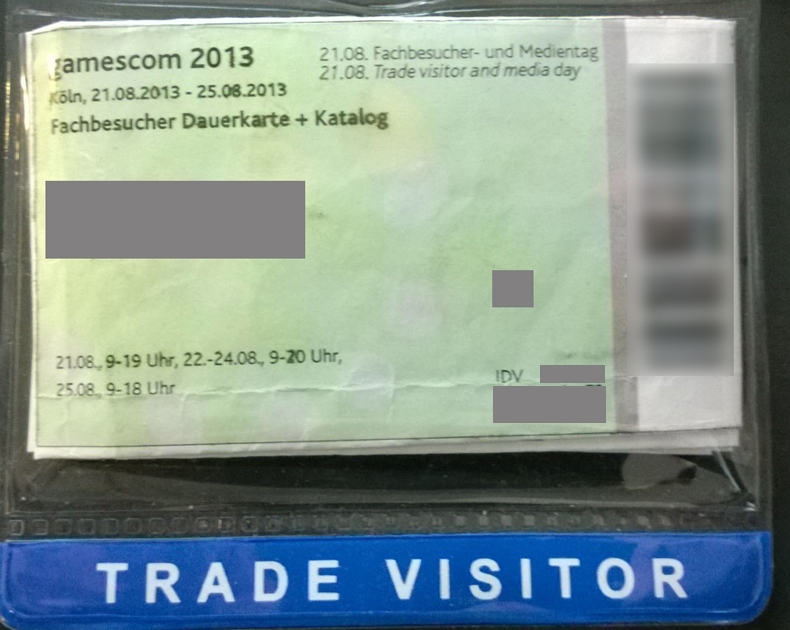 Now that the formalities are all out of the way. Here’s what the developer had to say about various topics surrounding the video game industry and #GamerGate.

One Angry Gamer: Can you say how long you’ve been in the games industry?

One Angry Gamer: When you were working on AAA titles, did you ever have any direct interactions with the press and if so, what were they like?

DevAnon: Yes and no. I went with the team to a few trade shows and did booth demos for the press, but it wasn’t a proper interview. In those cases they’re running from game to game all day, so it’s more for them to just see the game in action. The few times I’ve seen them out of that context, their behavior depends on how young they are. Lots of them don’t have any sort of formal journalistic training, so they tend to be more unprofessional and go by opinion and conjecture instead of fact and research.

OAG: Review scores through aggregate sites like Metacritic seem to dictate the fate of developers within the industry. Have you ever worked with a publisher where they made it known how important it was to get a certain Metacritic score for the title?

DevAnon: I think all of the big publishers care very, very much about their MC scores. That said, you can be sure a publisher will overlook a woeful Metacritic score if the game sells really well, and it’s no secret a lot of the big guys tend to influence their scores by influencing the journalist sites.

OAG: Have any of the studios you worked for been negatively affected by any Metacritic scores?

DevAnon: Not in the direct sense like the Fallout: New Vegas guys were (where they got an 84 Metacritic but were promised bonuses if they hit 85), but lower scores do affect morale if sales aren’t high.

OAG: It’s been mentioned that a lot of larger publishers use mock reviews to help gauge what the general review impressions will be like for a game. Was there ever a time where the direction of a game you worked on was changed or modified based on a mock review?

DevAnon: Most of the ones I’ve worked with even use companies to do mock reviews of their game to get estimated Meta scores. Those score reports can really influence the direction a game takes. Most of that seems to come from the marketing and PR guys, though. The actual devs seem to be pretty ambivalent about it, but we do keep it i n the back of our minds. And none of the ones I’ve worked on have been really affected, but we tend to make a bunch of small changes. Usually these are ones we were planning on anyway, but not always.

OAG: There are a lot of horror stories about publishers attempting to influence media publications for positive previews. Was there ever a time you worked on a project where certain things were cut out, purposefully added or modified for the sole purpose of preview demonstrations?

DevAnon: If we’re talking about demos that go to trade shows like E3 or PAX, those are usually hacked together and barely functional; so you could argue that the entire thing is designed to generate a positive impression. If you ever see a demo where the press or guests aren’t allowed to touch it, that usually means the slightest deviation from their intended route will cause crashes, major bugs, or otherwise reveal how broken the build is. Everyone does it, but only because those press builds take a long time to make and it’s not like we can just stop making the actual game in the background.

OAG: Have any of your peers in the development scene made it known what their stance is on #GamerGate?

DevAnon: A fair number don’t know about it, and it’s understandable. If you weren’t on very specific parts of Twitter or Tumblr and/or you had no idea about 4/8chan, where would you hear about it? The old guard of journalism sites is firmly entrenched in adopting a ‘What’s GamerGate?’ stance; so many devs only know of it in passing.

The few I’ve spoken with in the studio and elsewhere who do know about it think, like I do, that it’s a very real positive force in the industry. The ‘oh, the misogyny!’ claims are utter nonsense, Anita’s an obvious scammer who gets her marching orders from (hilariously) a white guy, and the notion that we as developers somehow are threatened by or seek to exclude women is patently absurd. (We’d love to have more qualified female developers in the studio, but the problem is they don’t apply; likely because I assume they don’t take the relevant STEM classes in school.) And most people know the game journo sites have always been corrupt or, at the very least, not on the level at all.

OAG: Also, have any publishers chimed in, at least in private discussions, about how they feel about #GamerGate, the aim for better transparency between journos and pubs, and better ethical guidelines for coverage between media and publishers?

DevAnon: I’m sorry, but I don’t have many dealings with our publisher so I can’t comment here. From what I’ve heard, the journalists are more or less an extended marketing arm of the publishers, so as long as their marketing messages continue to reach the journalists’ audiences, they’ll want to keep them going. But since many of the journo sites are actively pushing away their viewers…

OAG: What’s your general feelings about GamerGate and the media’s response to the whole event?

DevAnon: It’s one of the best things to happen to the industry since Dark Souls got a PC port. It’s also completely unsurprising the media is doing their best to ignore it. I mean, a huge part of GamerGate is pointing out media corruption; what incentive does the media have at all to respond to it? They tried silence at first in the hope it would go away, and when it didn’t they tried the disastrous ‘Gamers are over’ ploy. (Which no matter how I think about it, I can’t see how their editors thought that was a good idea.) I suspect they’re also quiet about it because I hear that many of them are hanging in there by a string.

Youtube and social media are eating their lunch in the same way gaming magazines died out when the internet blew up. But really, if you ever step back and take an objective look at their whole business model, I don’t see how you could arrive at any conclusion except ‘Well they’re probably corrupt; or at least not on the level. (They receive a large chunk of ad revenue and advance access to products which they’re tasked with reviewing; both of which are only provided at the discretion of the game publisher. It’s like when RockPaperShotgun had full intersital Diablo 3 ads all over the place and ran a host of ‘There aren’t any online problems! Diablo 3 is perfect! Quit being entitled!’ articles. If they were any more transparent, DARPA would ask them where they got their optic camouflage.)