I guess it’s the day of the threequals. First Gearbox announced that they were hiring for Borderlands 3 and now Scott Games has released the official trailer for his third game in the reputable horror series Five Nights At Freddy’s. The title has also appeared back on Steam Greenlight.

Scott had previously teased that a third game was in the works on his official website not too long ago. This caused a few gamers to question if he was attempting to milk the series, but it was explained that he has a good work ethic, a solid release schedule and his games actually work. If a developer meets the criteria of those three conditions then I don’t see why it’s necessary to rail on their work.

Anyway, GamesHQ Media tossed up the latest teaser trailer for the animatronic horror game, and you can check out the first few clips of Five Nights At Freddy’s 3 below, which is due out for PC.

The official description of the game from the Greenlight page reads…

Thirty years after Freddy Fazbear’s Pizza closed it’s doors, the events that took place there have become nothing more than a rumor and a childhood memory, but the owners of “Fazbear’s Fright: The Horror Attraction” are determined to revive the legend and make the experience as authentic as possible for patrons, going to great lengths to find anything that might have survived decades of neglect and ruin.

I’m terribly amazed and impressed at how quickly Scott can churn out these games and the kind of community feedback that he gets from the titles.

I had no idea that people were so terrified of scrubby, animatronic puppets. I’m guessing it touches on a childhood terror that most people have yet to fully express or engage until now?

Anyway, over on the official Scott Games website, the logo has been updated and an image of the number ‘3’ appears over some broken robot parts stuffed into a box. 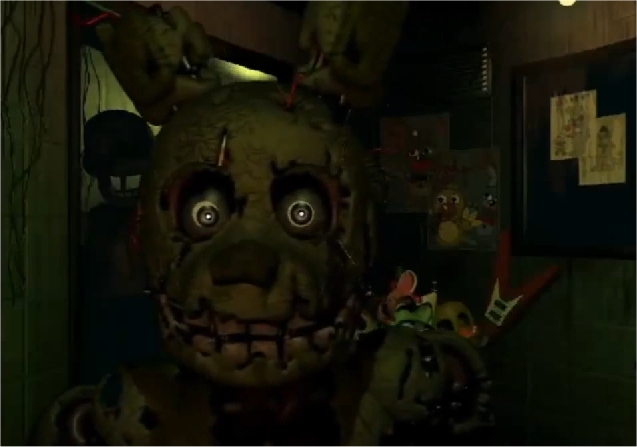 I’m not really sure how Freddy and his fiends keep coming back, but they always find a way.

I’m also kind of shocked a low-rent movie studio hasn’t come along and picked up the rights to do a movie based on Freddy Fazbear yet. This is ripe for the pickings of a company like Lionsgate.

Anyway, Five Nights At Freddy’s 3 is scheduled to arrive soon. I’m curious what sort of new mechanics or features the third game will sport. The first two titles received a lot of positive feedback and carried pretty low price tags, so there’s little to complain about regarding the price-to-playability factor.

You can learn more about Five Nights At Freddy’s by paying a kind visit to the official website or by voting for the game over on Steam Greenlight.