Uh oh, it looks like the dreaded review embargo could make or break Dying Light as it preps for launch on January 27th in North America. Valve sent out word that pre-loading for Dying Light is available to those who pre-purchased the game on Steam, but murmuring within the core gaming community has caused some to worry about the review embargo situation.

As noted in the Steam news update…

“Dying Light is coming soon to SteamOS/Linux and Windows! Pre-Purchase Now to receive the exclusive “Punk Queen” in-game weapon and start your pre-load now so you’re ready to play right at launch!”

Apparently reviews won’t be out until the game launches. No pre-release reviews, for as far as gamers can tell.

If you look around YouTube or search the regular major media outlets, no pre-release reviews have been posted for Dying Light at the time of the publishing of this article. This point is further driven home with the screen capture of Metacritic, which you can check out below. 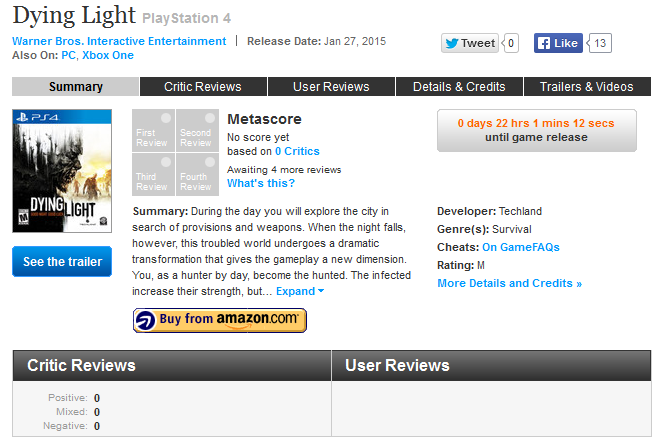 According to one user on the Reddit thread, Dared00…

“They haven’t sent any review copies. So technically there’s no embargo.

“So far, the only review was written by CD-Action in Poland, but they weren’t allowed to score it.

“EDIT: okay, now it gets really shitty. Another Polish magazine, PSX Extreme advertises the new issue with “Dying Light – first score in the world”. It comes on Wednesday. What the hell, Techland?”

The game was recently delayed in Europe and Australia, with the digital release set for January 28th, 2015 and the physical release set for February 27th, 2015, as reported by IGN. So technically, the review embargoes would not be post-launch, but actually day-of-release.

Previously, The Games Cabin had picked up news from an Ask.fm thread a month ago, where Dying Light’s lead game designer, Maciej Binkowski, commented about the game’s review embargo situation after someone asked if there would be post-launch review embargoes. He made a comment and later edited it, stating…

“No, we do not have embargoes of that nature. We want to be as transparent as we can towards our fans, so don’t worry – there won’t be any review embargoes AFTER the game is released.
Sorry I made a mistake. It was supposed to say “after the game is release” right from the start.”

Of course, the above comments may have assuaged gamers back then, but it hasn’t really made today’s antsy group of core gamers more at ease. This rings especially true following on the Shadow of Mordor scandal (also tentatively known as “ShadowGate” but a more appropriate name would have been the “Gates of Mordor”) where a lot of post-launch coverage was locked down in brand deals handed out by Plaid Social and approved by Warner Bros. Entertainment.

Another reason some gamers are heading to the shed where lighter fluid, torches and pitchforks are held is because Warner Bros., is also publishing Techland’s Dying Light. Select denizens of the gaming world fear that a similar situation could ensue.

Of course, if reviews start popping up pre-release, then all the worries of the world will be laid to rest. If, however, reviews are postponed until after the game’s release, we all know what’s what.

Dying Light looks like a genuinely fun game to me, so hopefully the situation is handled right by Warner Bros this time around. You can look to pick up a digital or physical copy of the game in North America starting January 27th, 2015 for PC, Xbox One and PS4.