New Footage Of No Man’s Sky Showcases An Active Universe 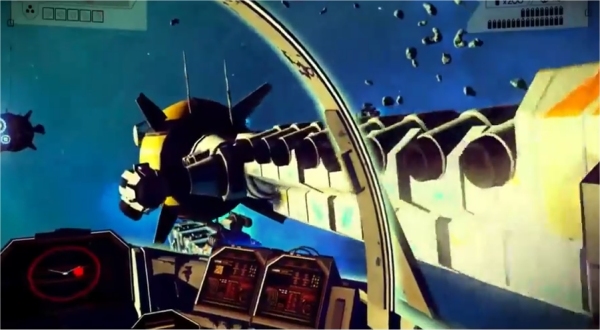 Coming out of the PlayStation Experience from last week’s event in Las Vegas, Nevada is additional footage of Hello Games’ No Man’s Sky. The footage is accompanied by an onstage instrumental performance to give gamers a really immersive experience that combines electronic rock with the images of the game.

DualShockers managed to post up a brief bit about the event, the game and the music. You can see it all in action with the video below. It’s well worth a watch if you’ve been keeping your eye on No Man’s Sky or you’ve always wanted to see more about the game to get a better idea of the scope and gameplay featured in the ambitious title from the little indie studio. Check it out.

Now, originally I had figured that the 16-minute video was probably 14 minutes too long. However, I was quickly proven wrong when things quickly got off to a nice, interactive start by showcasing a squad of ships taking off from the hangar Star Fox-style and then journeying through a quick flight in space past asteroids and a fleet of ships, only to arrive on a planet and dock on a landing pad.
I don’t know if those were NPCs or other players, but the whole thing looked really nifty.

I actually love the fact that I can’t tell players from A.I. I tend to hope that the entire gameplay experience is going to be this muddled blur between human and computer, so players will have to gauge their interactions accordingly. It could add a nice little bit of depth to the game’s social interactivity.

You can look for No Man’s Sky to launch for consoles and PC, supposedly sometime in 2015. Need more info? Feel free to hit up the game’s official website.