Hatred Has Officially Been Greenlit For Steam 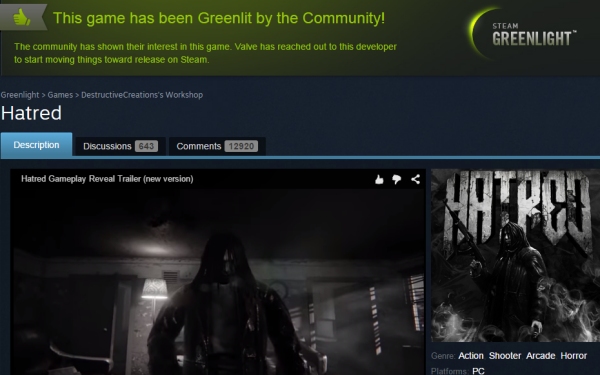 After a hundred thousand votes and a lot of gamer support, the controversial isometric shooter from Destructive Creations has officially been approved to appear on Steam. The game Hatred kicked up tons of fuss when it first landed on Greenlight and the radical moral police threw a hissy fit and wanted it removed from Steam. Well, after a lot of huffing and puffing and community support, Hatred has officially been greenlit to appear on the Steam store. That’s right, if Destructive Creations has a real game to sell, they can sell it on Steam.

Over on the official Greenlight page for Hatred, the game has been flagged as getting the thumbs-up approval by Valve to appear on their store.

The game was originally dismissed from Steam on December 15th after being submitted earlier that morning. The outcry from the anti-gamers – and yes, the anti-gamers are mostly gaming websites and media outlets that cover tech and electronic entertainment news – tried shaming Valve into banning Hatred from Steam following their previous praise of GTA V being removed from Target and Kmart in Australia.

Gamers have recognized that their major media outlets they used to go to for information and news are actually their number one enemy at the moment; gamers had to rally together and petition hard to get Hatred back on Greenlight.

The great and powerful GabeN – Gabe Newell – came to the rescue; swooping in on his Glorious Corsair Cooled steed, sending a strong freedom of speech message to the developers that their game, Hatred, would be allowed on Steam.

The based levels blew off the charts and gamers exclaimed that the great GabeN had come to save the day. With that, Hatred was reinstated on Steam Greenlight and became the number one game on the service. 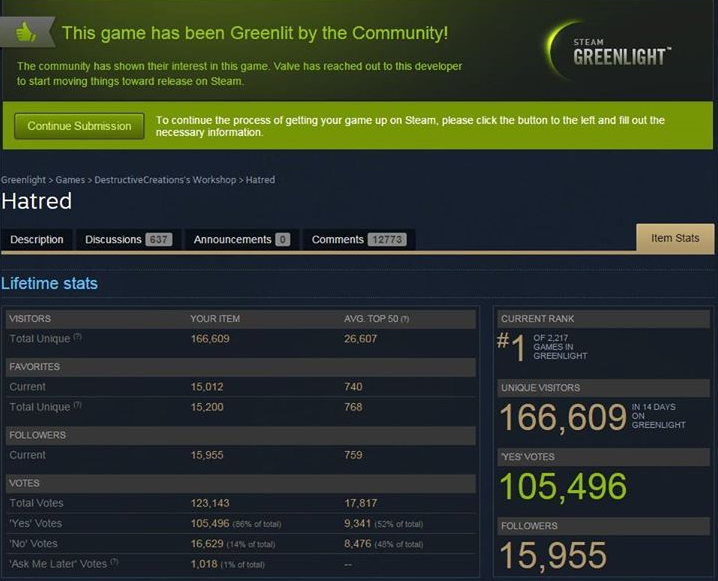 Today – whether you approve of the content in the game or not – we celebrate the right to freedom of speech and creativity by developers with the approval of Hatred having the option to appear on the Steam store. No matter where you stand on the content in the game (even though it’s just a higher-fidelity version of the original Postal, which was a very serious murder simulator back in the day) you at least have to appreciate that fanboys and fangirls from all walks of gaming came together to ensure that a developer’s creative vision was not hampered by the corrupt moral police.

You can learn more about Hatred by visiting the official Greenlight page. Warning: it’s not for everyone.

25 thoughts on “Hatred Has Officially Been Greenlit For Steam”