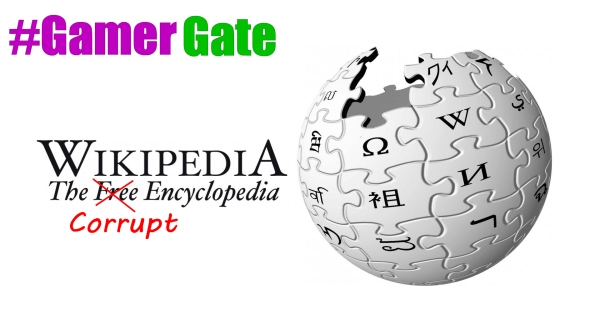 [Update: A more comprehensive breakdown of each of the Wikipedia inaccuracies relating to the #GamerGate entry can be found here]

[Original article:] This #GamerGate Wikipedia article is a poorly written, factually inaccurate, politically influenced piece of typed-out propaganda. There are very few facts present in the article and it is a prime example showcasing why Wikipedia cannot be trusted as a neutral source for any topic, especially if the articles can be allowed to inherently mislead and misrepresent data for individual, group or agenda-driven purposes.

This is a breakdown of the factual inaccuracies of the article as of December 28th, 2014.

Citation needed. There is no proof that there has been ongoing harassment and threats primarily targeting women. This statement begs the question and is both unproven and a logical fallacy.

#GamerGate is a hashtag started by Adam Baldwin on August 27th, 2014 [via Topsy] to represent the scandal in video game journalism, as stated in his interview with AGP Nation. The Wikipedia statement lacks a citation to the appropriate reason Baldwin started the hashtag and that statement continues to commit the same logical fallacy as above.

Based on those two paragraphs alone, this article is neither neutral nor factually accurate.

This entire statement is factually incorrect. It is not an allegation regarding Quinn having a romantic relationship with Nathan Grayson, it is a proven fact, even by admission from editor-in-chief at Kotaku, Stephen Totilo. This was explicitly mentioned in the article on Kotaku. Wikipedia failed in accurately citing this fact, even from a third-party source.

It’s incorrect that there was a failure to identify significant ethical issues in games media. There was the discovery about the Shadow of Mordor brand deal that Total Biscuit uncovered. There was Phil Fish and the alleged IndieCade racketeering . There was the case of Allistair Pinsof and Kevin Dent allegedly being blacklisted, 40,000 users being hacked and a journalist failing to report on it, Wizardchan being falsely accused of harassment, the sloppy journalism from Ben Kuchera regarding Brad Wardell – an event that spawned an apology from a member of the Game Journo Pros list – as well as Breitbart breaking the story about the Game Journo Pros and their various ethical failures. That entire paragraph on Wikipedia was either constructed from a lack of fact-checking or a biased agenda.

The “History” section is unnecessary unless it was to go back and include both Gerstmanngate and Doritogate. Both had to do with the corruption within the media, the first involved Jeff Gerstmann being fired for a mediocre review score and the second involved a writer being out of a job from Eurogamer after exposing corruption, as detailed by Know Your Meme. Speaking of Know Your Meme, the site has a better, more accurate recount of #GamerGate than Wikipedia. Nevertheless, #GamerGate has been a long time coming, and the history should also include things such as the Diablo III DRM, Capcom DLC, Mass Effect 3 ending controversy and the SimCity DRM fiasco.

Under the Wikipedia entry of #GamerGate for “Subsequent Harassment”, this was falsely stated.

Citation needed. If you claim someone harassed you, you’ll need a citation that it came from that individual or group. Hearsay is not fact, stating it as such is both misleading and a lie.

Misleading and a false cause. The link in the citation has no proof or even mentions an association of #GamerGate with the alleged death threats mentioned in the Wikipedia entry. This is a blatant misappropriation of a citation and highly indicative of an editor engaged in narrative spinning. They should either switch the citation or remove the line, especially since it has nothing whatsoever to do with #GamerGate.

There’s also no mention of the #GamerGate harassment patrol finding Anita Sarkeesian’s harasser and reporting him to the authorities, but Sarkeesian refused to cooperate in having her harasser arrested. This was even documented by Kotaku. Purposefully omitting blatant facts for a publicly available piece of information is indicative of agenda-based propaganda.

The entire section regarding “Misogyny and antifeminism” should be removed, as it has no purpose or relation to ethics in media journalism. The hashtag is about a scandal relating to corruption in games journalism; adding in unnecessary sub-categories dealing with specifically with sociological, political and gender issues in cultured societies should be in a gender politics topic such as Wikipedia’s own “Gender studies”.

The ethical issues have either been ignored or brushed aside. None of the journalists have answered for their ethical breaches brought up in the Game Journo Pros, or the lack of disclosure regarding conflicts of interest, such as press being in relationships with PR or developers, as well as disclosure and transparency regarding native advertising, paid and affiliate links.

Additionally, the FTC does not consider the aforementioned issues “debunked” or “dealt with”, which is why Gawker is revamping their privacy policy on January 19th, 2015, and why Defy Media overhauled their ethics policies, as well as Destructoid, IGN, Polygon and Kotaku. The above statements in the Wikipedia entry are blatantly dis-informative.

Consumers can’t uncover corruption that happens behind closed doors between AAA companies and journalists; only journalists can report on that kind of closed-door corruption. The inclusion of those statements in the Wikipedia entry are disingenuous, intellectually dishonest, circular and deflective. Only those who support the current climate of corrupt journalism would shift the goalposts of fair reporting – and the uncovering of industry corruption – from journalists to consumers.

I just recently sent select Game Journo Pros e-mail digests to Jimmy Wales, the co-founder of Wikipedia. If the editors try to deny their potency or relevance to the corruption coverage relating to #GamerGate it means the editors at Wikipedia are calling Jimmy Wales a liar, since he’s in possession of the e-mails now. Alternatively, if they acknowledge that he has the e-mails but refuse to report on the information and properly disclose to the public the proper citations from third-party websites who have reported on the issue, or if they’re willing to hide the information, then they are abetting in the corrupt behavior of the Game Journo Pros, which includes allegedly having breached federal antitrust laws.

What kind of encyclopedia organization would be willing to purposefully hide information that relates to a group of individuals who may have broken a federal law?

If a company purposefully tried hiding information relating to the Watergate scandal, would you donate to that organization? Furthermore, would you trust that the said organization is neutral with any of their coverage on any topic?

All of that is an embarrassing display of fact-checking incompetence. “Largely pushed by sockpuppets” was debunked with people being forced by those adopting racist and misogynistic tendencies against those using #NotYourShield to disclose their identity through pictures and videos to prove they were minorities, LGBT and women.

What’s more is that the 4chan chatlog story was actually peddled in the Game Journo Pros as a narrative conspiracy in order to get the media to falsely report that those using the #NotYourShield hashtag were sockpuppets. This was made evident from the leaked e-mails.

Even more than that, 4chan released their full chat logs in order to disprove the conspiracy concocted by the Game Journo Pros, but the media – and those who are pushing narratives at Wikipedia – refuse to report the truth. This media slant against #GamerGate was also evident and admitted to by a reporter from the Australian Broadcasting Corporation and the executive producer from the CBC’s The National.

What’s worse is that Jimmy Wales was even made aware of an editor being paid by a group who has vested interests in misinforming the public via the #GamerGate Wikipedia entry, but continues to refuse to take any action to maintain ethics of his website… even in the face of documented evidence [backup].

Fair neutrality should never favor ineptitude. Why would anyone bother donating to a site that stands by the principle of advocating sloppy journalism?

Any respectable journalist should feel ashamed to even be quoted in a Wikipedia article peddling biased, agenda-driven propaganda.