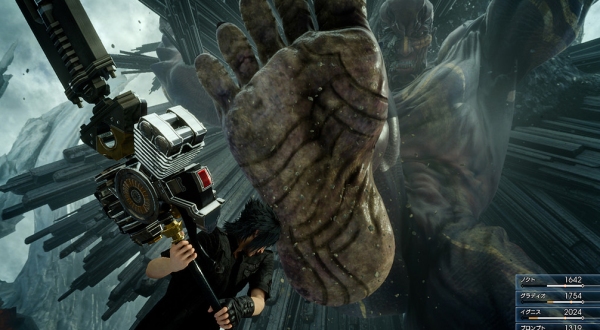 Following some of the video footage that Square Enix released for Final Fantasy XV during the Jump Festa 2015 event last weekend, a collection of high definition screenshots have been let loose into the wild for gamers to soak up and soak in as they continue to trudge through the long wait for the release of the highly anticipated JRPG.

All Games Beta has a collection of the screenshots that you can check out via a simple Flickr set. The screenshots are mostly HD captures from the video streams that Square featured during the Jump Festa event, including that one unforgettable shot of the protagonist using the sword to try to cut the foot of the titan. Check out the screenshots below.

Final Fantasy XV is still somewhat of a mystery. The actual release for the game could be 2015, but based on the little that was on display at Jump Festa, the geometry wasn’t entirely complete for one of the cities and the voice work wasn’t finished. It’s very hard for me to believe that before next fall Square will have the game in tip-top shipping shape by then. If the geometry isn’t complete in some areas then obviously some of the quests aren’t complete, because you can’t have quest nodes if the map isn’t complete (although, that isn’t to say that the quests may not be scripted out, because they very well might be).

For the most part, I just hope Square takes their time and hammers out a really fun, engaging game with characters worth rooting for… basically, the complete opposite of Final Fantasy XIII. Man oh man did a lot of those whiny, teenage-looking pop-kids annoy the piss out of me. Lightning could have been all right had she a decent arch-villain and some teammates who weren’t annoying.

Anyway, we can definitely expect to see more of Final Fantasy XV throughout 2015. If I were a betting man, however, I would probably say the game won’t be righteously ready until maybe 2016; but we’ll see.