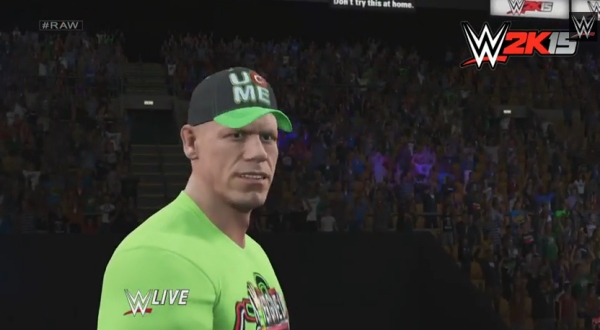 It’s been available for the past couple of days, but I imagine for anyone who was a wrestling fan that got entrapped in the daily grind called life or that little nuisance known as work, you may have missed out on the initial hoopla surrounding the release of WWE 2K15 for the Xbox One and PS4. As a bit of a promotional reminder, the WWE let loose a video featuring John Cena making his iconic entrance on the eight-gen rendition of Yukes’ annual wrestling title.

WWE 2K15 released in October for the geriatric twins, the Xbox 360 and PS3, but it was delayed by a month for the Xbox One and PS4.

Over on GameStop there are plenty cheek-dried tears that worked in correlation with the emotion-driven disappointment with this year’s installment to prompt for a bunch of gamers to give the seventh-gen outing of WWE 2K15 an embarrassing 1 out of 5 stars. One of the users simply wrote…

One of the things I find funny on that GameStop page is that they hide the reviews on the main product page and instead only show the “glowing” previews. It’s quite hilarious. Anyway, you came to see John Cena walk down a ramp and get into a wrestling ring, so by Jove you shall the leader of Cenation walk down a metal ramp and climb into a wrestling ring. Check it out below.

I’m not really that impressed with the graphics, but then again it takes a heck of a lot to sway me over these days when it comes to AAA titles.

But if you aren’t in it for the graphics you’ll probably like knowing that a lot of gamers still commend the game for having a solid bit of gameplay attached. So this is great news for anyone who wanted a solid wrestling experience for their Xbox One or PS4.

I would suggest watching a Let’s Play or two before deciding, of course.